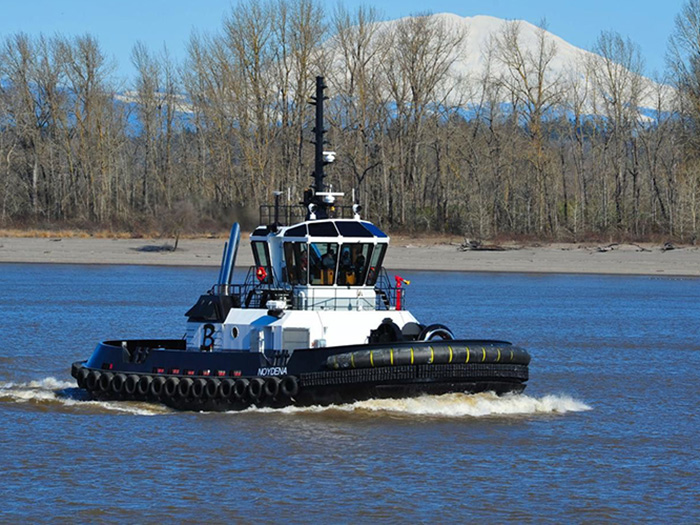 New vessels will be sisterships to the Noydena, delivered earlier this year.

Portland, Ore., shipbuilder Diversified Marine Inc. has booked an order to build a pair of Robert Allan Ltd. (RAL) RApport 2500 design tugs for Brusco Tug & Barge of Longview, Wash. They will be the ninth and 10th RAL designed tug ordered at Diversified by Brusco. The first, the Wynona Spirit, was ordered back in 1999.

“Bo Brusco is a close, close friend of mine. Over the years, we have done a lot of business together, but I have always seen him as a friend first, customer second,” says Kurt Redd, CEO of Diversified Marine. “These will be our ninth and tenth boat builds for Brusco Tug & Barge. You don’t hear about that kind of relationship between a shipyard and operator often. Our business is built on relationships and we are thankful for the one we have with Brusco. It has allowed us to work on great, cutting edge boats and develop industry leading capabilities. We are excited to start work on the latest tug—it’s going to be a beast.” The tugs are under construction now and will deliver in 2021.

Jim Hyslop, manager of project development and principal at Robert Allan, has been involved with many of the Brusco builds.

“Brusco has been a great, longtime customer of Robert Allan Ltd.,” he says. “We are pleased to see their fleet of RAL tugs continue to grow. The RApport 2500 series is a remarkable vessel and we look forward to the upcoming projects.”

Diversified Marine is the leading builder of RAL design tugs in the U.S. and Hyslop says the long relationship has been a major benefit in the build process.

“We are always happy to work with DMI because of the quality of work they put out and their familiarity with Robert Allan designs,” he says.

The two tugs just ordered will be sisterships of the first RApport 2500 built in the U.S., the Noydena, which was chartered to Crowley by Brusco and renamed the Hercules.

The tugs will be powered by two CAT 3516E Tier IV main engines. Each of the tugs in the three-build series will have more power than the last. The Noydena, delivered earlier this year, boasted 6,008 hp. with 89-ton bollard pull, the second tug will deliver 6,302 hp. and the third 6,772 hp. withan anticipated bollard pull in the mid to high 90-ton range.

The Z-drives on the second tug will be the first to be supplied by Sweden’s Berg Propulsion since it reverted to its original name after several years of being owned by Caterpillar and branded as Caterpillar Propulsion.

Diversified Marine was the leading shipyard installing the systems under the Caterpillar Propulsion name.

“DMI is a titan in the industry when it comes to building tugs. Kurt Redd and Bo Brusco are always looking for ambitious projects that push the limits of what is possible. It’s a lot of fun to work with customers that really like to move the needle. Diversified Marine installed the first CAT Propulsion systems in the U.S. and the first CAT Tier 4 marine engines.”

The Berg Z-Drives will be MTA 628 units with Berg controls in the pilot house.

The tugs will also have a fire-fighting capability with a Carver fire pump capable of 1,250 gallons per minute.