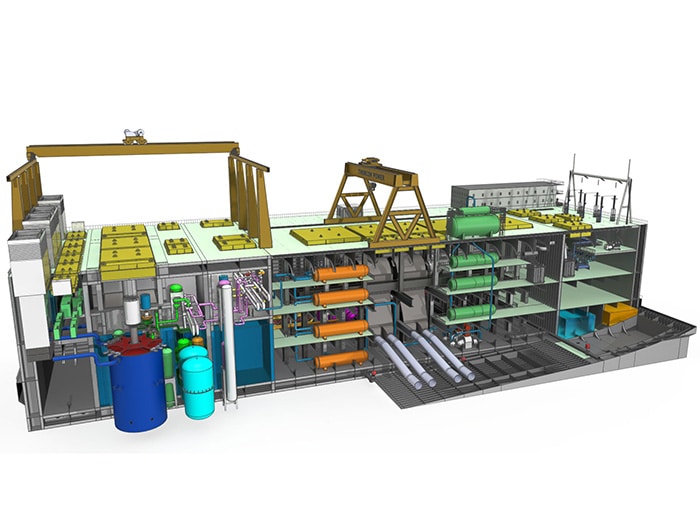 The concept developed by ThorCon is a molten salt fission reactor. Unlike current nuclear reactors, the ThorCon reactor would operate at low pressure and use liquid fuel. The liquid fuel enables much higher operating temperatures, leading to greater efficiency while also enabling completely passive safety (requiring no action from the operator nor intervention on the power source to stop the reaction).

Thorcon says that its technology is a straightforward scale-up of the successful United States Oak Ridge National Laboratory Molten Salt Reactor Experiment (MSRE), which concluded in 1969, and that a full-scale 500 MW ThorCon prototype could be operating under test within four years. .

In the project underway with BV, the 500 MW fission power plant will be integrated within a floating barge hull and then towed to a shallow water site before being ballasted to rest on the seabed. The technology will then deliver energy to the power grid to meet land-based energy needs. ThorCon plants will be designed to be mass produced, which will support the transition to carbon free and reliable energy.

BV has been selected to support ThorCon through its Technology Qualification process, both for the nuclear reactor itself and for its encapsulation (enclosed safe compartmentalization allowing the replacement of depleted fuel) and integration with the hull systems.

Experts from Bureau Veritas’ Nuclear Certification Department and from the Marine & Offshore Division will collaborate throughout the process. A key area of work will be to identify the applicable standards, codes and Class Rules, potential gaps with those currently available and the development if needed of new guidance notes and rules.

ThorCon has entered into discussion with the Indonesian province of Bangka-Belitung, the State Electricity Company PLN, and the Nuclear Energy Regulatory Agency BAPETEN regarding potential sites for the demonstration and the final installation of a 500 MW power plant.

“Nuclear power is increasingly seen as one of the means to achieve global decarbonization and the 1.5°C objectives. New technologies, such as molten salt reactors, open opportunities for the deployment of nuclear energy, power generation in the marine environment being an example,” said Laurent Leblanc, Senior Vice President Technical & Operations at Bureau Veritas Marine & Offshore. “At BV we are proud to be at the forefront of safe innovation, supporting pioneers like ThorCon, by helping them assess the feasibility of new nuclear technology development up to their industrial application. Our role is to assess and address risks to ensure such technologies can be deployed with the highest safety standards. This project is very exciting as it can be a stepping stone to other applications such as the generation of hydrogen offshore and even nuclear ship propulsion.”

Devanney, who holds a BS and MS in naval architecture, previously served on MIT’s faculty of Ocean Engineering and has a history of designing and managing the fabrication and operation of ships. He conceived the idea of building the MSR, the steam turbine-generator and all associated assets into a large hull which can then be floated to the site where the power is needed.