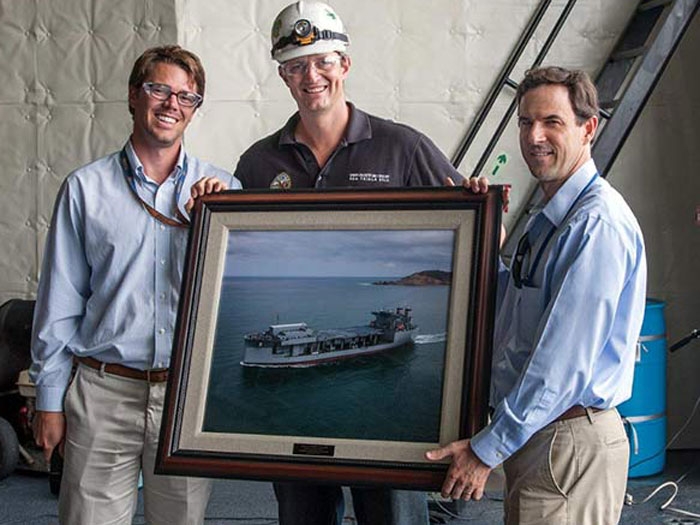 The ship is the first afloat forwarding staging base (AFSB) variant of the MLP and is designed around four core capabilities – aviation, berthing, equipment staging area, and command and control. It is optimized to support  multiple missions including Air Mine Counter Measures (AMCM), counter-piracy operations, maritime security operations, humanitarian aid and disaster relief missions and Marine Corps crisis response. The ship is designed to support MH-53 and MH-60 helicopters, and will be upgraded to support MV-22 tilt rotor aircraft.

The ship is named in honor of the late U.S. Marine Corps Lieutenant General Lewis “Chesty” Puller, the most decorated Marine and the only one to be awarded five Navy Crosses.

“Today’s delivery of the USNS Lewis B. Puller to the U.S. Navy symbolizes an immense culmination of efforts made by the hard-working men and women of the General Dynamics NASSCO shipbuilding team,” said Kevin Mooney, vice president of operations at the General Dynamics NASSCO shipyard. “At NASSCO we are building and delivering affordable ships that are providing new and revolutionary capabilities for America’s Navy and Marine Corps.”

The U.S. Navy has awarded NASSCO a contract for the detail design and construction of a fourth Mobile Landing Platform, to be configured as another Afloat Forward Staging Base. Construction is scheduled to begin in the fourth quarter of 2015.