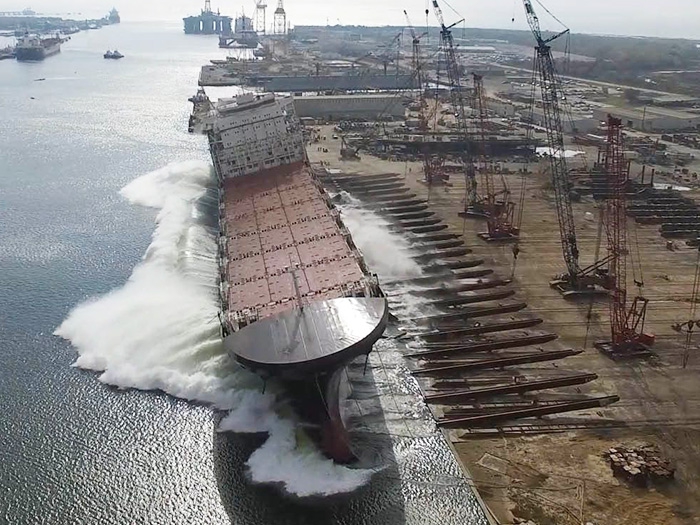 The launch of the ship at the Pascagoula, Miss., shipyard this past Monday marks the latest milestone in Crowley’s transformation and modernization of its shipping and logistics services between Jacksonville, Fla., and San Juan, Puerto Rico.

The new ships, port terminal improvements and technology upgrades underway are all designed to improve the overall velocity of the customers’ supply chains and speed products to retail shelves.

Taíno will now proceed through the final topside construction and testing phase before beginning service in the U.S. Jones Act trade in 2018. She will join sister ship, El Coquí, which was launched earlier this year and is now in final testing prior to entering service in early 2018.

“Monday’s launch represents another momentous achievement for the men and women at Crowley, VT Halter Marine and other partners, who have dedicated themselves to designing and building this pioneering ship as well as sister ship, El Coquí,” said Tom Crowley, company chairman and CEO. “We appreciate their hard work, and look forward to putting these modern, environmentally-friendly ships into service for our customers and the people of Puerto Rico.”

Construction of both El Coquí, which is named for the popular indigenous frog on the island, and Taíno, the name for native Puerto Ricans who lived off the land and who had great appreciation and respect for their environment, is being managed at the shipyard by Crowley’s solutions group, which includes naval architects and engineers from company subsidiary Jensen Maritime.

Taíno, like El Coquí, will be able to transport up to 2,400 twenty-foot-equivalent container units (TEUs) and a mix of nearly 400 cars and larger vehicles in the enclosed, ventilated and weather-tight Ro/Ro decks.

A wide range of container sizes and types can be accommodated, ranging from 20-foot standard, to 53-foot by 102-inch-wide, high-capacity units, as well as up to 300 refrigerated containers.

“The added speed and efficiency provided by these high-performing ships will benefit customers shipping goods between the mainland and the island,” said John Hourihan, senior vice president and general manager, Puerto Rico services. “Cargo for businesses and consumers will be able to dependably reach markets at peak time, whether it is dry, refrigerated, or breakbulk, such as vehicles and other rolling stock.”

Fueling the ships with LNG will reduce emissions significantly, including a 100-percent reduction in sulfur oxide (SOx) and particulate matter (PM); a 92-percent reduction in nitrogen oxide (NOx); and a reduction of carbon dioxide (CO2) of more than 35 percent per container, compared with current fossil fuels.

Monday’s launch continues a series of steps this year that have already enhanced Crowley’s capabilities in Puerto Rico.
In San Juan, Crowley has begun operating three neq Liebherr ship-to-shore gantry cranes at its Isla Grande Terminal. The cranes are the first new, specialized gantry cranes to be received for operation in San Juan Harbor in more than five decades. The cranes complement a new 900-foot-long, 114-foot wide concrete pier at Isla Grande.

The TOS in both San Juan and Jacksonville accelerate gate operations and reduce trucker turn times at the terminals by as much as 50 percent.

In Jacksonville, Crowley and Eagle LNG Partners also are completing final testing of the tanks and systems associated with the LNG Fuel Depot at JAXPORT’s Talleyrand Marine Terminal, which will serve as the fueling station for the new ships. The depot features two 260-ton, cryogenic LNG tanks, constructed by Chart Industries in Europe.
Crowley has served the Puerto Rico market from the 85-acre Isla Grande Terminal since 1954, longer than any other Jones Act carrier in the trade. The company, with 300 Puerto Rico employees, offers more weekly sailings in the market than any other shipping line.