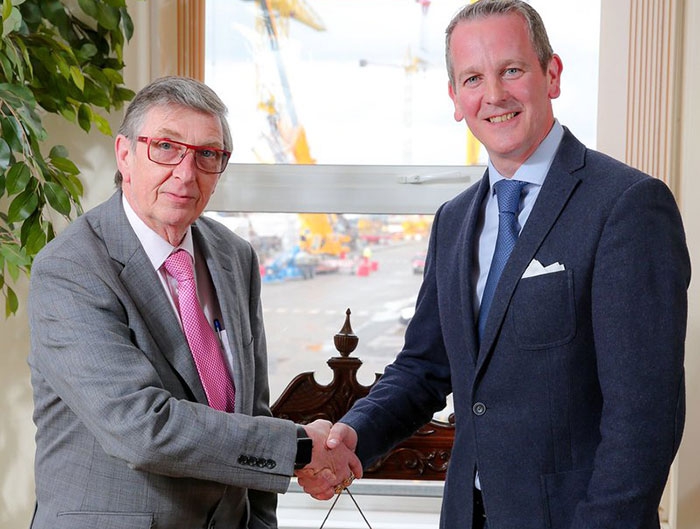 Jonathan Guest (right) is to succeed Robert J. Cooper (left), who is stepping down as CEO after a 44 year career with Harland and Wolff

Cooper began his career at Harland and Wolff as an accountant in April 1974. He rose through the ranks of the shipbuilder during a time of great transition including the privatization of the company and its purchase by Norwegian stock exchange listed Fred.Olsen Energy AS. He has been acknowledged as the CEO who returned H&W to profit through a successful strategy of diversification, leading the firm into the renewable energy sector, design engineering and the growth of the ship repair and conversion business.

Jonathan Guest holds an Honors degree in Manufacturing Engineering and an MBA from the University of Ulster and is commercially focused with strong financial analysis and business growth experience. He is fellow of the Institute of Directors in 2011 won the Institute’s coveted “Global Director of the Year” award.

“I have been involved with Harland and Wolff from the earliest stages of my career and I cannot express how delighted I am to take charge of this magnificent company,” said Guest. “Robert J Cooper has left a legacy of stability, innovative spirit and a can-do approach which has benefited us highly. He took some very tough decisions during his career to assure the continuing survival and eventual success of the company and I intend to continue his good work.”