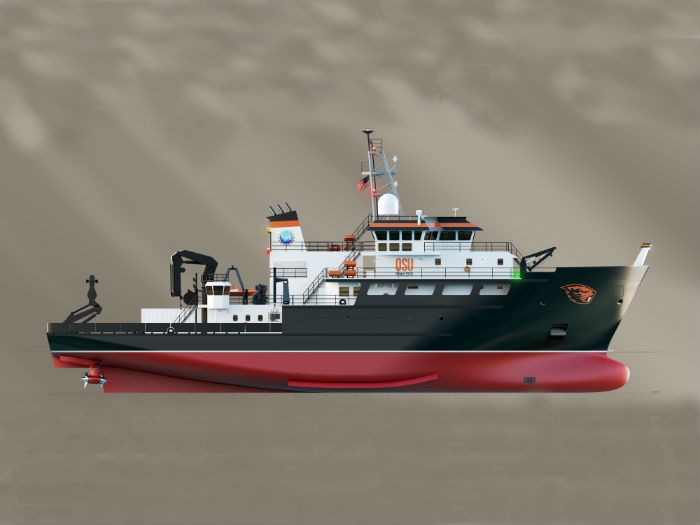 OSU received the largest grant in its history—$121.88 million from the National Science Foundation (NSF) for the construction of the first of three planned vessels approved by Congress for research in coastal regions of the continental United States and Alaska. When funding for the next two vessels is authorized, the total grant to OSU could increase to as much as $365 million. The first vessel is slated to be operated by OSU for research missions focusing on the U.S. West Coast. The NSF will begin the competitive selection of operating institutions for the second and third vessels later this year—likely to universities or consortia for operations on the U.S. East Coast and the Gulf of Mexico.

The keel for the first vessel will be laid in Houma, LA, and will be delivered to OSU in the fourth quarter of 2020. This vessel will be ABS Ice-Class C0 and DPS-1, Green-Marine Certified, acoustically quiet, and carry up to 16 researchers and 13 crew. It will be equipped with high bandwidth satellite communications for streaming data and video to shore. It will have a cruising speed of 11.5 knots and top speed of 13 knots.

“Oregon State University is extremely proud to lead this effort to create the next generation of regional ocean-going research vessels funded by NSF,” said OSU President Edward J. Ray. “Our exceptional marine science programs are uniquely positioned to advance knowledge of the oceans and to seek solutions to the threats facing healthy coastal communities – and more broadly, global ecological well-being – through their teaching and research.”

Gulf Island Fabrication says the revenue and man-hour backlog associated with the award will be included in the company’s second quarter report.

“With contract signing complete we are eager to start construction and deliver the state-of-the-art Regional Class Research Vessel to Oregon State as they continue on their mission of research and exploration,“ says Kirk J. Meche, Gulf Island Fabrication President and CEO.

“OSU is excited to work with Gulf Island Shipyards to deliver the nation’s newest class of oceanographic research ships to the National Science Foundation and the ocean science community. Gulf Island’s reputation for quality work and customer service are a perfect fit for this important project,” says Dr. Roberta Marinelli, Dean of OSU’s College of Earth, Ocean, and Atmospheric Sciences.

“Rising sea levels, ocean acidification, low-oxygen waters or ‘hypoxia,’ declining fisheries, offshore energy, and the threat of catastrophic tsunamis are issues not only in the Pacific Northwest but around the world,” Marinelli says. “These new vessels will provide valuable scientific capacity for better understanding our changing oceans.”

The ships will be equipped to conduct detailed seafloor mapping, to reveal geologic structures important to understanding processes such as subduction zone earthquakes that may trigger tsunamis. The Pacific Northwest is considered a high-risk region because of the Cascadia Subduction Zone, which has produced about two dozen major earthquakes of magnitude 8.0 or greater over the past 10,000 years.

The new ships will also be equipped with advanced sensors that will be used to detect and characterize harmful algal blooms, changing ocean chemistry, and the interactions between the sea and atmosphere. The emerging fields of wave, tidal and wind energy will benefit from ship observations. Oregon State is the site of the Northwest National Marine Renewable Energy Center, which in December was awarded a grant of up to $35 million from the U.S. Department of Energy to create the world’s premier wave energy test facility in Newport.

“This class of ships will enable researchers to work much more safely and efficiently at sea because of better handling and stability, more capacity for instrumentation and less noise,” says Clare Reimers, a professor in the College of Earth, Ocean, and Atmospheric and project co-leader. “The design also has numerous ‘green’ features, including an optimized hull form, waste heat recovery, LED lighting, and variable speed power generation.”

OSU is expected to begin operating the first of the new ships in the fall of 2021, after a year of testing and then official Academic-Fleet designation by the University-National Oceanographic Laboratory System (UNOLS), according to Demian Bailey, also a project co-leader for OSU.

“There will be a full year of testing because there are many interconnected systems to try out,” Bailey said. “Any new ship needs to have shakedown cruises, but we’ll have to test all of the scientific instrumentation as well, from the acoustic multibeam seafloor mapping system to its seawater and meteorological data collection, processing and transfer capabilities.

“These ships will be very forward-looking and are expected to support science operations for 40 years or longer. They will be the most advanced ships of their kind in the country.”

OSU previously operated the 184-foot R/V Wecoma from 1975 until 2012, when it was retired. The university then assumed operations of Wecoma’s sister ship, R/V Oceanus, from Woods Hole Oceanographic Institution; that ship will be retired when the new ship is ready.