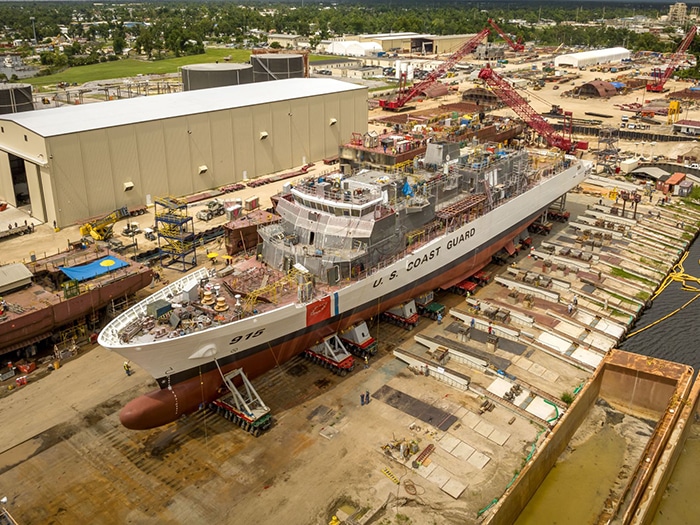 A bid protest is a challenge to the terms of a solicitation or the award of a federal contract. The GAO (U.S. Government Accountability Office) Procurement Law Division adjudicates these bid protests. You can find out more about the process HERE.

ESG was the original prime contractor for the whole of the OPC program, but in June 2019 submitted a request to the Coast Guard’s parent agency, the Department of Homeland Security for extraordinary contract relief after its shipbuilding facilities sustained significant damage resulting from Hurricane Michael, a Category 5 storm, in October 2018. In response, then Acting Secretary of Homeland Security Kevin K. McAleenan made the decision to grant extraordinary contract relief limited to the first four hulls. Following that, the Coast Guard revised the OPC acquisition strategy “to mitigate emergent cost and schedule risk by establishing a new, full and open competition for OPCs five and through 15, designated as Stage 2 of the overall program.”

Since surviving Hurricane Michael, ESG has fully rebuilt its operational facilities. It has made many infrastructure investments. These infrastructure investments include an aluminum fabrication facility specifically designed to support full construction of the OPC aluminum superstructure in a covered and controlled environment. ESG has also completed launch way upgrades, upland bulkhead upgrades, construction platen expansions, and waterway deepening projects to further enhance ESG’s capability to launch and deliver two OPC sized vessels per year. It has also constructed a state-of-the-art C5ISR Production Facility to conduct testing and integration of navigation, communication, and command and control, equipment, and simulators on premises prior to final installation on the vessel.

Joey D’Isernia, president of ESG, issued this statement on the decision to file the bid protest:

“Upon careful evaluation of the OPC Stage 2 award, we have found several grounds for protest that have been filed with the U.S. Government Accountability Office. Our decision to protest does not come lightly. Our community is left reeling from the decision to abandon our workforce and move the Coast Guard’s largest acquisition program from our successful production line to a high-risk situation. It begs the question, why? While this process plays out, we remain committed to our USCG partners and delivering shipbuilding excellence on the first four hulls. We are grateful for the outpouring of support we have received.”

BACKGROUND ON GROUNDS OF PROTEST

The following are just some excerpts from the public redacted protest filing submitted to GAO by ESG on Monday, July 18:

“If the USCG had reasonably evaluated and made the award in accordance with the RFP, ESG would have received the award.”

“The procurement was also deeply flawed because the USCG (a) ignored or otherwise failed to mitigate the USCG’s leak of ESG price data and (b) failed to avoid an Austal unfair competitive advantage arising from Austal’s use on its proposal writing team of a former USCG employee who had access to competitively useful non-public information.”

“The Austal award cannot be reconciled with the RFP and stated USCG objectives. ESG was higher rated and provided lower risk with strong, relevant past performance. Austal’s purported lower price is overwhelmed by the substantial risks associated with an award to Austal, a new entrant to the steel shipbuilding industry with a record of well publicized cost overruns and performance issues. The USCG’s flawed evaluation risks depriving the United States of a significant shipbuilding capability (ESG, judged ) in the United States’ Defense Industrial Base at a time of rising near-peer capabilities by hostile nations. The Austal award is inconsistent with the USCG’s stated objective in the RFP and elsewhere seeking a sustainable shipyard that can produce a fleet of OPCs over the long term. The USCG award arbitrarily ignores the additional risks and costs associated with award to Austal.”

“The USCG’s award to Austal is also contrary to USCG representations to GAO regarding the OPC program. Previous USCG statements to GAO support ESG’s protest. The USCG noted to GAO numerous positive aspects of ESG OPC 1 performance demonstrating low ESG schedule, technical and cost risk for the OPC program. The USCG evaluation and award here is inconsistent with prior USCG statements and rewards Austal for the low price, high risk approach contrary to the RFP and the USCG’s stated objectives.”

In its filing ESG asserts that “the USCG violated the Competition in Contracting Act (“CICA”), the Federal Acquisition Regulation (“FAR”), and the terms of the RFP” and says that “The USCG award determination was arbitrary and unreasonable.”

ESG asserts that it was materially prejudiced by a number of procurement errors that it addresses in the filing. It says that the USCG evaluation “unreasonably failed to evaluate Austal schedule, cost and technical risk.”

“Given Austal’s status as a new entrant to steel shipbuilding and its well-publicized performance issues on large projects,” ESG says in the filing, “the USCG should have evaluated schedule, cost and technical risks higher, all of which could result in substantially higher actual costs to the government and delays and disruptions in contract execution, sustainment of the delivered vessels, and extended sustainment of existing vessels when the schedule slips.”

In the alternative, the Comptroller General should recommend that the USCG reevaluate proposals, conduct clarifications or discussions, reevaluate revised proposals in accordance with the RFP criteria, assess Austal conflict and unfair competitive advantage issues and then make new responsibility and award determinations.”

“We are confident in the integrity of the solicitation process and that the United States Coast Guard’s selection of Austal USA as the Stage II OPC shipbuilder will be upheld. We will remain focused on delivering world-class ships to our customers.”