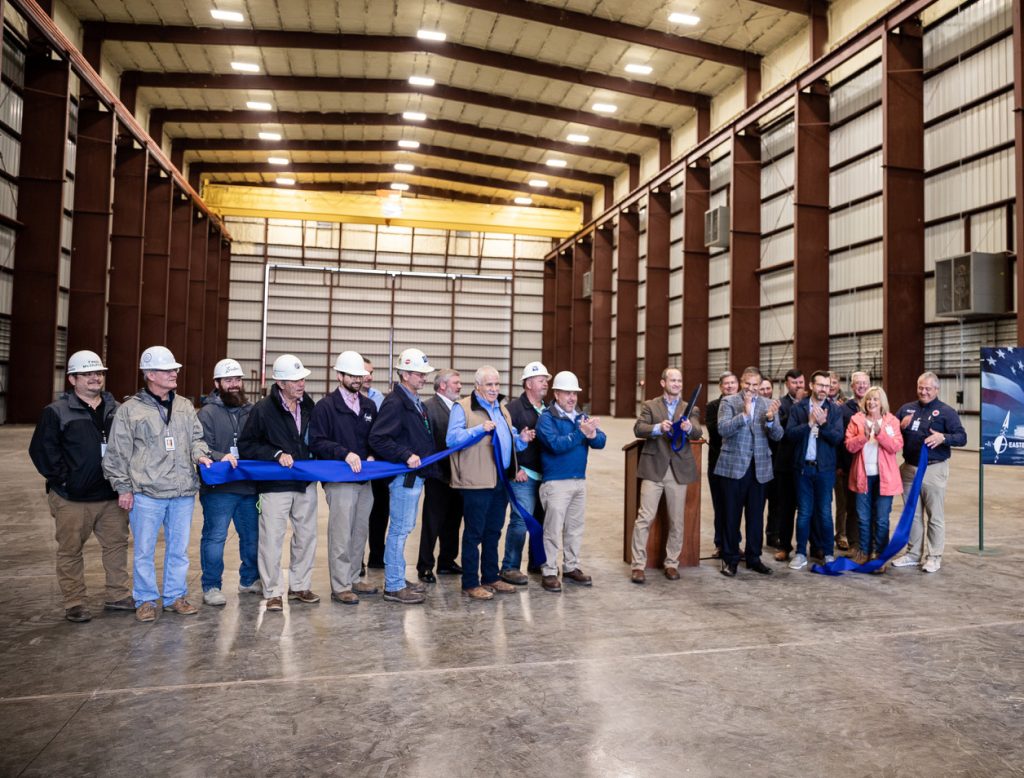 “The construction of this new facility manifests our commitment to provide the country a long-term industrial capability that can build the most exceptional national security assets on schedule and on budget,” said Joey D’Isernia, president of Eastern Shipbuilding Group. “Every day we employ the highest quality craftsmanship to incorporate the finest materials and equipment in these vessels to ensure USCG mission success along our country’s many coastlines. Construction of fabrication capabilities like this new facility, enhance our capabilities while reducing cost and schedule risk. I thank Triumph board members across the panhandle and their staff, as well as area leaders for their investments in support of the USCG OPC program here in Panama City.”

The aluminum fabrication facility, with significant crane capacity and hook height, has a heavily reinforced high-strength concrete slab flooring system and large sliding entryway doors. It was specifically designed to support full construction of the OPC aluminum superstructure from fabrication through assembly and outfitting in a covered and controlled environment.

The facility is sized to enhance ESG’s ability to support the peak production rate of delivering two OPCs per year and is part of ESG’s commitment to upgrade and tailor its USCG-dedicated Nelson Street Shipyard to meet the needs of the USCG’s future medium endurance cutter fleet.

In addition to enhanced capabilities, the new hurricane hardened building is built to the latest stringent Florida building codes. The original building was destroyed by Hurricane Michael in 2018. Over the last three years, ESG has fully rebuilt its operational facilities with insurance proceeds and has also made infrastructure expansion investments from $50 million in state appropriations and economic development grants.

The company has recently completed launch way upgrades, upland bulkhead upgrades, construction platen expansions, waterway deepening projects and has many more improvement projects underway as part of its commitment to provide a dedicated facility that is optimized for construction of the Offshore Patrol Cutter.

At its Allanton Shipyard, ESG has constructed a state-of-the-art C5ISR Production Facility to accomplish testing and integration of operational combat systems, equipment, and simulators on premises prior to final installation on the vessel. ESG will continue to improve its facilities as part of its focused vision to support the USCG’s highest acquisition priority with shipbuilding excellence.

The facility was commissioned in a ceremony attended by leaders of the United States Coast Guard Project Resident Office and local, state and Triumph Gulf Coast officials.

“The City of Panama City is proud to collaborate with the State of Florida, Triumph Gulf Coast, our neighbors in Bay County and the school board in partnering with Eastern Shipbuilding Group to continue supporting the Offshore Patrol Cutter program for the long term,” said Panama City Mayor Greg Brudnicki. “We believe our community is unmatched anywhere in the country to support the U.S. Coast Guard. We commend Eastern Shipbuilding Group for bringing jobs and opportunities to the region and for the transformative work it’s accomplished since the hurricane. It is the best shipyard to build the OPCs.”

“Triumph Gulf Coast is pleased to have partnered with the City of Panama City and Eastern Shipbuilding to provide the new aluminum fabrication building that it is so important to the success of the USCG OPC contract,” said Triumph board member Ben Lee. “It is an honor to have a role in supporting our military and we hope to continue to support those that protect our nation through partnerships here in Bay County and across our entire region.”