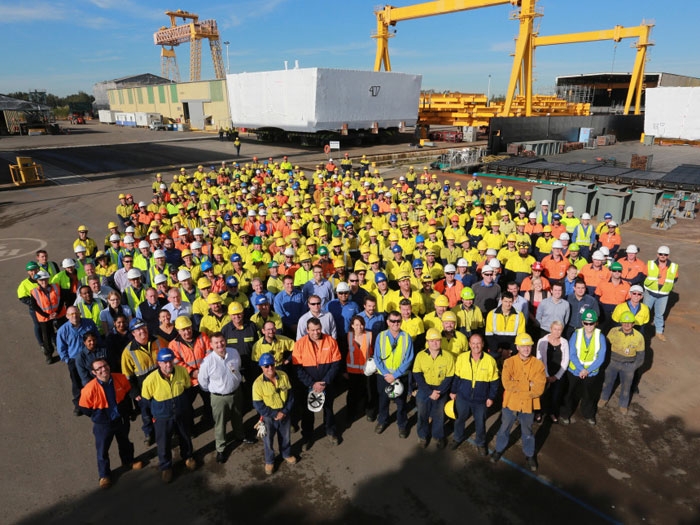 By the end of the year, these Forgacs shipbuilders could be working for a new corporate parent

Forgacs is Australia's largest privately-owned engineering and shipbuilding company and part of the team building the Hobart Class Air Warfare Destroyers (AWD) for the Royal Australian Navy, manufacturing 37 of 93 AWD blocks at its indoor modular shipbuilding facilities.
Singapore listed line with Civmec said today that it has agreed to enter into a due diligence phase for the acquisition of certain Forgacs assets and the Forgacs name.

Forgacs' products' business, Forgacs-Broens Pty Limited, does not form part of the sale and will continue to operate from its Ingleburn, NSW and Elizabeth, SA facilities.

Civmec says it believes that "the considerable opportunities in the infrastructure sectors on the east coast as well as the long-term outlook within the defense, oil & gas and metals & minerals sectors justifies the investment."

Civmec CEO Pat Tallon said, "This is a very exciting opportunity for our company to extend our multi-disciplinary operations to the east coast of Australia and to gain a long established foothold in the defense shipbuilding industry. It will also give us the opportunity to acquire in-house submarine building and technical expertise. We will be well positioned to capitalize on the significant infrastructure expenditure planned for the east coast and our increased capacity will allow Civmec to deepen our relationship with existing blue chip clients nationally, as well as bringing on board new regional clients."

Peter Burgess, Chairman of the Forgacs Group commented, "Forgacs has more than 50 years' experience in the heavy engineering and projects business and entered the naval ship repair business in 1990. It has grown its naval involvement progressively, undertaking major naval programs including the conversion of HMAS Manoora and HMAS Kanimbla into Amphibious Helicopter support ships; hull modules for the ANZAC frigates and most recently the AWD program. The Tomago shipyard has built some of Australia's iconic ships such as ice breaker Aurora Australis, HMAS Tobruk and hull sections of Collins Class submarines. Our shipyard is ideally positioned for Civmec's future plans."

Quite how, if at all, this fits in with Civmec's submarine building ambitions remains to be seen. When it unveiled those plans it said that it had the capability to be the in-country builder for whoever won the submarine contract and that it would add a new dedicated facility for building submarines at its Henderson, Western Australia, facility — which is quite some ways distant from the Forgacs shipyard.

NOVEMBER 17, 2017 — Back in September, Australian heavy engineering company announced the launch of a new defense division that had its sights set on building Australia’s new submarines.