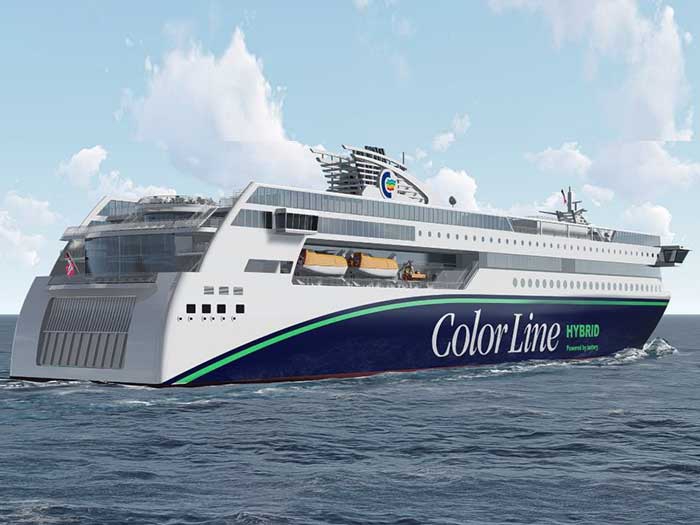 JANUARY 25, 2017 — Norway’s Color Line and Ulstein Verft have signed a Letter of Intent (LOI) for the construction of the largest plug-in hybrid vessel in the world.

Designed by Fosen Yard, it will be 160 m long and have a capacity of 2,000 passengers and about 500 cars. The ship will provide significantly increased capacity on the Sandefjord-Strömstad route between Norway and Sweden.

The vessel is planned to enter service in summer 2019.

The plug-in hybrid vessel’s batteries will be recharged via a power cable with green electricity from their own shore facilities or recharged on board by the ship’s generators. It will operate fully on battery power into and out of the environmentally sensitive fjord to Sandefjord.

“This is an important milestone for us, and we are very pleased that we have been chosen as partner in this very exciting project. We are looking forward to the further cooperation with Color Line,” says Ulstein Group CEO Gunvor Ulstein.

The vessel, with the working title Color Hybrid, will have almost double the capacity of the M/S Bohus, which will be phased out when the new ferry enters operation.

“The signing of the LOI represents a significant step to realize the world’s largest plug-in hybrid ship. It is very gratifying that the Norwegian shipbuilding industry has proven its competitiveness internationally,” says Color Line CEO Trond Kleivdal .

Color Line is currently the only company in the international passenger and freight traffic to and from Norway with ships registered in the Norwegian Ship Register and with Norwegian headquarters.

“The focus on a new vessel with new green technology happens partly because the company, through the Government’s maritime strategy, has received approximately identical conditions as their competitors in the Nordic region,” says Trond Kleivdal.