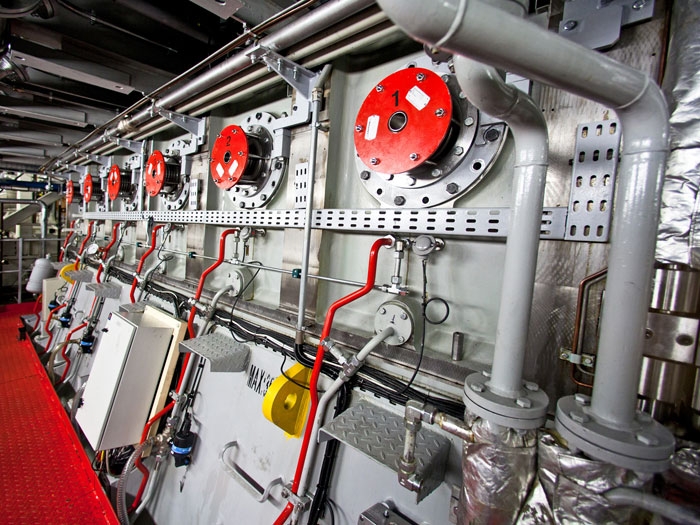 NOVEMBER 12, 2013 — Wärtsilä has successfully conducted full scale testing on gas of its low-speed two-stroke dual-fuel engine and is now introducing a full new range of engines using the technology. The first engine, the Wärtsilä RT-flex50DF, will be available for delivery in the third quarter of 2014. Other engines from the company’s new Generation X series will follow and will be available for delivery during 2015 and 2016.

The entire portfolio of Wärtsilä two-stroke engines will be available as low pressure dual-fuel (DF) versions. The benefits of this technology are significant. Compared to other technologies, studies show that Wärtsilä’s low pressure DF engines offer capital expenditure (CAPEX) reductions of 15-20 per cent. This is achieved through a substantially simpler and lower cost LNG and gas handling system operating at pressures below 10 bar, and by the fact that no further exhaust gas cleaning systems are needed to meet future emission regulations. The new engines are IMO Tier III emissions compliant in gas mode, and the minimum Tier II level is achieved with liquid fuel.

On the operating expenditure (OPEX) side, Wärtsilä says that significant gains will be achieved with its technology. This is because no high pressure gas compression system external to the engine needs to be operated onboard the vessel, and NOx abatement systems are not required.

Another main advantage is that the Wärtsilä technology allows stable operation on gas across the entire load range.

Wärtsilä’s low pressure gas system meets all safety requirements. Since low pressure gas technology is the standard for all four-stroke engine makers today, the merit of this concept is clearly proven.

“The benefits of the new low pressure dual-fuel technology for two-stroke engines are significant,” says Mr Martin Wernli, Vice President, two-stroke, Wärtsilä Ship Power. “Describing this as a game-changing development for merchant shipping is certainly no exaggeration, since the many advantages of being able to use gas and LNG as primary fuel are now, for the first time ever, available to virtually all vessel types. Our well proven technologies for both the engines and the onboard gas and LNG handling systems, can now be applied to this wider market. With the adaption of low pressure dual-fuel technology to two-stroke engines, Wärtsilä brings the proven advantages it has demonstrated in the four-stroke, medium-speed DF engine market to its two-stroke low speed engine customers

Wärtsilä successfully introduced its low pressure dual-fuel engine technology for four-stroke engines for land based applications in the 1990s, and for marine applications soon afterwards. Since then, the company has delivered more than 1,000 such dual-fuel engines accumulating more than 7 million running hours.

The application of natural gas as a widely accepted fuel for merchant shipping is likely to become a reality in the near future. The environmental benefits and attractive pricing that gas offers are expected to drive demand, with a resulting increase in market share for gas fuel.

By introducing low pressure two-stroke DF engine technology, says Wärtsilä, it is accelerating this major trend since it makes the application of gas as a marine fuel easier and safer for owners, operators and shipyards. It envisages that by 2020, more than a quarter of ] ordered vessels could be designed to run on gas fuel.

Wärtsilä is currently in the process of finalizing the documentation for the first of the new series of engines, the Wärtsilä RT-flex50DF. Preparations for classification society approvals are underway.