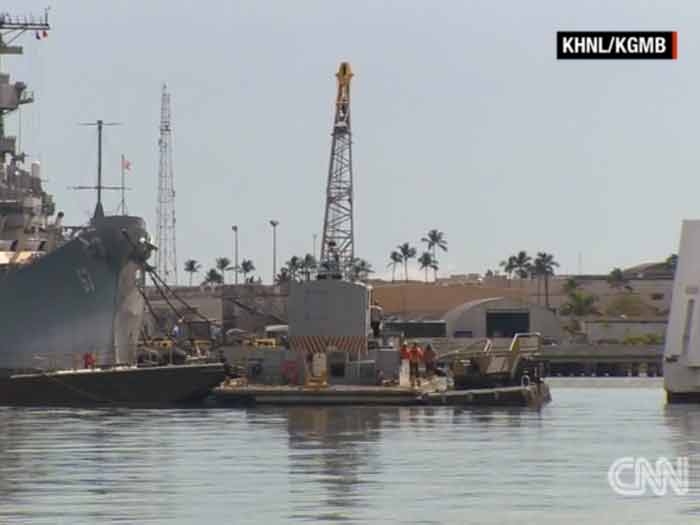 MAY 29, 2015 — The USS Arizona Memorial remained closed to visitors today as repair work continued on the floating dock used by boat tour groups to access the Memorial.

Initial reports were that the structure had been hit either by the hospital ship USNS Mercy or by tugboats assisting it.

According to Navy Region Hawaii Public Affairs, on May 27, the hospital ship was being maneuvered by two civilian tugboats to transit Pearl Harbor from its berth at Hotel Pier as it prepared to go to sea.

“As the Mercy turned to head out to the channel, the ship may have made contact with the floating dock leading to the USS Arizona Memorial. Strong prop wash from the ship pushed the floating dock and access structure (brow) approximately ten feet toward the memorial, damaging handrails and the dock’s infrastructure.

“There was no damage to the remains of the USS Arizona vessel and no apparent damage to the Mercy. The memorial experienced minor superficial damage. There were no injuries.”The Navy removed the brow and immediately began repairing the above-water floating dock and access structure and evaluating the underwater mooring system of chains and concrete block anchors.”

The Navy says it hopes to have all repairs done by June 3 so the memorial can be reopened to visitors June 4.

The Military Sealift Command will lead the Navy’s investigation of the incident.

The Coast Guard is currently conducting a marine casualty investigation. Maritime casualties involving credentialed mariners fall under the jurisdiction and authority of the U.S. Coast Guard.