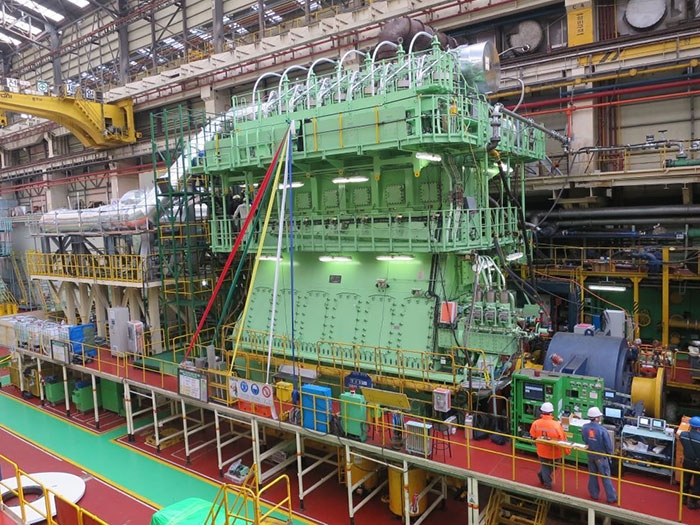 The announcement comes less than three months after the January 1, 2016 entry into force of IMO’s MARPOL Annex VI Tier III limits on NOX emissions in Emission Control Areas (ECAs) for ships with keels laid on or after that date.

The system is supplied by HHI-EMD and at a shop test on March 23, it demonstrated its ability to reduce the engine’s NOx emissions below Tier III  limits for vessels operating in ECAs. Similarly, at the shop test, the Wärtsilä X72 engine demonstrated its compliance with the NOx limits of IMO Tier II without exhaust after treatment.

HHI-EMD says that locating the SCR catalyst in the hotter exhaust gases before the turbocharger turbine is designed to reliably achieve the temperature level required for the NOx-reducing reaction of the exhaust gases with the urea reducing agent.

In addition to WinGD Korea and HHI-EMD staff, the March 23 test was witnessed by representatives of classification society ABS Korea, KR, shipbuilder Hyundai Samho Heavy Industries, and SeaQuest Marine Project Management. Following the test, the 15,080 kW rated engine (74.7 rpm) was delivered to the Hyundai Samho Heavy Industry shipyard in Samho-Eup, Yeongam-Gun, South Korea, where it will be installed in a 159,000 DWT crude oil products tanker.

With IMO Tier III compliance assured, the ship will be permitted to enter North American and Caribbean waters, which is the first ECA to be declared.

“This demonstration of the ability of our two-stroke engines to comply with IMO Tier III is a clear statement of intent from WinGD and its engine manufacturers to provide ship owners with the engines they need to operate in ECAs”, notes Thomas Werner, WinGD’s Tier III Program Manager, R&D. “Hence, the ship powered by the Wärtsilä X72 engine will be one of the first capable of complying with IMO Tier III when trading with the USA and Canada.”