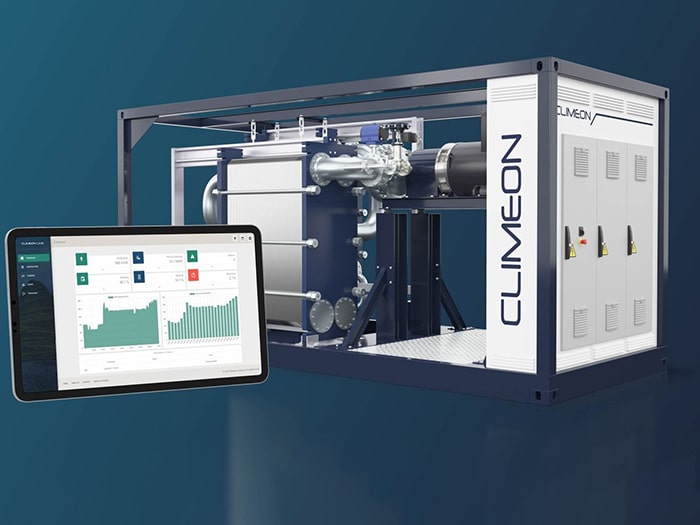 Swedish-based Climeon AB is using SMM to launch its new waste heat recovery technology, HeatPower 300 Marine, on the maritime market. The system generates clean electricity from low-temp waste heat produced by a ship’s engines and is capable of producing up to 355 kW of carbon-free electricity from a single unit,

HeatPower 300 Marine has been created for larger vessels with engine sizes from 15 MW and up. Its modular, scalable and SOLAS-compliant design ensures maximum onboard waste heat can be repurposed into clean electricity. Up to three HeatPower 300 Marine units can be installed on a single vessel, depending on the available thermal energy, delivering up to 1 MW of renewable power.

When carbon-free energy is produced on board, ships are less reliant on diesel-powered generators, which means less fuel is consumed by the vessel. Climeon claims its HeatPower 300 Marine can reduce CO2 emissions and cut fuel consumption by up to 5%, improving vessels’ EEDI/EEXI and CII ratings and enabling ship owners to meet the increasingly stringent environmental regulations facing the industry.

While most waste heat recovery products rely on high-temperature heat inputs, Climeon’s patented HeatPower technology uses low-temperature waste heat to generate renewable, carbon-free energy. As most of the heat produced on board ships is low temperature, this increases the availability of thermal energy and maximizes clean energy outputs.

HeatPower 300 Marine can generate clean electricity from waste heat at temperatures as low as 80 degrees Celsius. The low minimum temperature requirement means that HeatPower systems can rely solely on jacket cooling water or HT cooling water to produce carbon-free power, simplifying the installation process and increasing the applicability of waste heat recovery throughout the maritime industry.

The Climeon HeatPower Control system monitors and manages onboard electricity production for optimal performance and can easily be integrated into a ship’s existing management system, meaning minimal on-site supervision is required. Its autonomous operation ensures that maximum thermal energy is utilized, with the system going into standby mode if no waste heat is available.