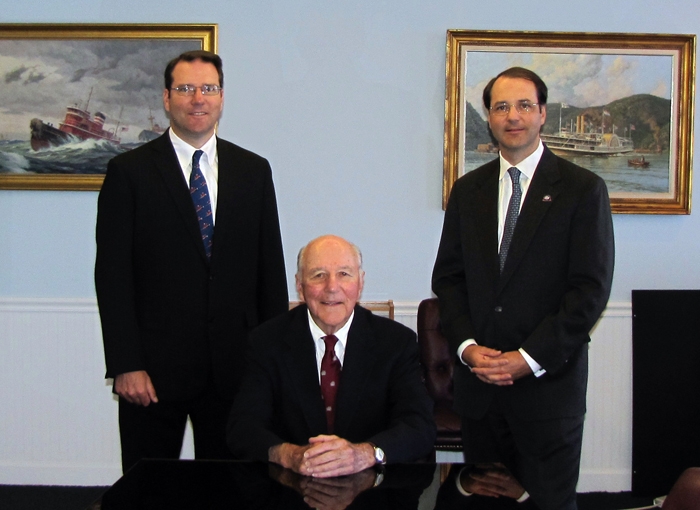 August 15, 2014—How does a company stay in business for a century and a half—surviving and thriving during a Civil War, two World Wars, and the Great Depression. McAllister’s formula: reinvesting, constantly, in its business and in the industry’s future.

This September, New York-based, and family-owned McAllister Towing and Transportation celebrates its 150th anniversary. The company, one of the oldest and largest marine towing and transportation companies in the U.S., was founded in 1864—at the time, Lincoln was President, the American Civil War was still raging and the Brooklyn Bridge was yet to make up part of the now famous New York City skyline.

The company got its start when Captain James “Whiskers” McAllister (pictured at right), an immigrant from Ireland, founded it with a single sail lighter. He named the business the Greenpoint Lighterage Company—before it went on to carry the McAllister name. The lighter was used to carry cargo from the borough of Manhattan across the East River to Brooklyn.

James, who is remembered through family lore as being a tough guy and having a “knack for overcoming setbacks,” would go on to bring relatives from Northern Ireland to work for him, making the business, truly a family one.

One hundred and fifty years later, McAllister operates a fleet of more than 70 tugboats and barges in 17 locations along the U.S. East Coast from Portland, ME to San Juan, PR and is led by fourth (Captain Brian McAllister) and fifth generation McAllisters (Buckley and Eric).

Ebb and Flow
Managing to survive in an industry that is always changing, is no easy task. Trying to keep that business in the family isn’t either. McAllister’s history has been riddled with trying times from a son being fired for putting “a diesel engine on an old tug with a bad boiler” (Founder James McAllister fired son A.J. but later reinstated him); the Great Depression; to the business being split a number of different ways.

But every time McAllister gets knocked down, it finds a way to get back up.

Talking to the company’s Chairman, Captain Brian McAllister, who is the great grandson of founder James McAllister, and a member of the fourth generation of McAllisters, is like stepping back into New York Harbor’s heydey, bristling with ship and tug activity.

Brian began working for the family business in 1943 when he was just 12 years old.  Thirty-one years later, in 1974, he would go on to buy the company from his father for $20 million.

At the time McAllister had already made ship docking its primary business, after the lighterage business dwindled following World War II—but the mid 1970’s brought a new opportunity to McAllister in the form of oil.

Not one to miss an opportunity, McAllister stepped up to the plate when Mobil Oil, the principal owners of Aramco, wanted to move 12 million barrels of oil from Saudi Arabia. To accomplish their goal, they needed powerful tugs to do the job. In came McAllister with 4,000 hp, flanking rudder, twin-screw tugs.

Soon, though, as with all things that rise, the price of oil collapsed from $40 to $7 a barrel, rigs were shut down, and in the 1980s McAllister saw the need to sell off the 18 vessels it had working in the Saudi region. Belco Petroleum, which ironically enough McAllister would come to own later on, bought eight boats—the remaining 10 vessels were sent to Peru.

Finding Balance
While the oil business was lost, McAllister was able to keep its ferry service—an operation that has been credited with keeping the company afloat during difficult times.

Established in 1883 by P.T. Barnum, the Bridgeport & Port Jefferson Steamboat is currently owned and operated by McAllister Towing & Transportation. The McAllister’s initially had a minority stake in the company before taking on ownership.

“In the early 1980’s,” explains Buckley, “McAllister proposed to ramp up the operation with the construction of two new ferries which would increase the capacity and speed of operations.” But when the other owners showed no interest in taking on the debt required to pay for new vessels, McAllister took it upon itself to make the investment. “Since that time, the ferries have acted as a nice counterbalance to the tug operation,” says Buckley.  “The company grew beyond expectation and made a profit that helped support the overall company,” adds Captain Brian McAllister.

The ferry operation features three passenger/car ferries. Each ferry has the capability of carrying 1,000 passengers and 100 cars.

New Generation, New Fleet
When current McAllister President, Buckley McAllister, spoke before attendees at Marine Log’s Tugs & Barges Conference, he noted that McAllister’s business strategy has remained the same throughout the years: “Take care of your customers, take care of your employees and reinvest resources back into business.”

Reinvesting in the business has long been part of the McAllister tradition. Buckley says, “Whatever money was made in the business went back into the business.” This, in essence, helped founder Captain James amass of fleet comprised of tugs, barges, derricks and passenger-carrying sidewheelers before his passing in 1916.

That reinvestment spirit remains alive and well—most prominently, over the last two decades. With sons Buckley and Eric on board, McAllister has reinvested in its fleet—operating some of the most powerful tugs on the East Coast. The McAllister’s know full well that fewer ships are being docked at ports—on average, calls at ports have dropped five percent a year—but the few ships that do come in and dock are large and require more powerful, expensive tugs.

To meet demand, over the last 14 years, McAllister has added two tractor tugs to its fleet per year.  Those z-drive tractor tugs feature the latest firefighting equipment and capabilities.  McAllister has invested heavily in technologies and vessels that will meet the industry’s growing transportation and regulatory demands.

Recently, the company took delivery of the Buckley McAllister from Senesco Marine, North Kingstown, RI.  Named after company President Buckley McAllister, the 5,100 hp, 92 ft x 36 ft Jensen designed ASD tug will provide service on the Cape Cod Canal.  The Tier III compliant tug is fitted with a pair of 3516C HD diesel engines from Caterpillar, rated at 2,575 hp at 1,800 rev/min.  The Buckley is ABS classed, can reach a speed of 12 knots and has a bollard pull of 67 tons.

The Eric McAllister, named after the company CFO, is the next addition to McAllister’s fleet, and is currently under construction at Senesco. The Tate, named after famous actor Tate Donovan (who also happens to be a cousin), is being built at Washburn & Doughty, East Boothbay, ME.

Another piece of the reinvestment puzzle is McAllister’s role at ports down the United States East Coast. Over the course of its history the company has expanded its business, setting up towing operations at various ports.

New Ports, New Opportunities
“To be resilient, we need to be prepared,” and being prepared costs money, notes Buckley.  Its ventures into new waters, has enabled the company to make up for dwindling returns in other aspects of its business.

• Charleston, SC: The port of Charleston is one of the largest container and intermodal ports in the U.S. McAllister has been providing towing and harbor assist services in Charleston Harbor since 1987. Additionally, it provides offshore towing on the East Coast, Caribbean and Gulf of Mexico.

• Georgetown, SC: Since 1988, McAllister has been handling the area’s extensive breakbulk traffic, all the while providing docking, undocking, and harbor assistance services.

• Jacksonville, FL: McAllister has been providing ship docking services since 1986 at the Port of Jacksonville. Currently it serves over 2,200 vessels entering the port.

• New York, NY: Where it all began in 1864. McAllister now provides a variety of services to ports in both New York and New Jersey, handling “a significant part of 16 million tons of cargo” every year. New York based tugs perform ship docking services and general harbor assist work in addition to offshore towing along the East Coast.

• Philadelphia, PA: Since 1949, McAllister has been operating in Philadelphia harbor along the Delaware River. Here, beyond its usual service offerings, McAllister also provides barge towing services on both the upper and lower Chesapeake Bay.

• Port Everglades, FL: Port Everglades is currently one of the fastest growing ports in the U.S. with container, cargo and cruise ships entering the port daily. In 2004 McAllister took over Tugz International LLC’s operation at the port.

• Portland, ME: McAllister operates as Portland Tugboat, LLC, in Portland, ME. It handles a wide range of cargo and provides ship docking and harbor assist services in areas of the Portland Harbor, Casco Bay, and Cousin’s Island on Hussey Sound.

• San Juan, PR: Operating at the “Hub of the Caribbean” since 1967, McAllister provides ship docking and coastal towing services throughout the Caribbean from its base at the Port of San Juan.

• Virginia: McAllister has been operating at the Port of Hampton Roads for nearly 50 years. Serving Yorktown, Piney Point, Hampton Roads, Norfolk and the Chesapeake area with towing and general harbor assist work.

• Wilmington, NC: Since 1987, McAllister has been serving the Port of Wilmington with docking services and general harbor assistance from Harbor Limit to Southport.

A Touch of Magic
When Marine Log made its way over to McAllister’s headquarters in Battery Park—a mere five-minute walk from our own offices—we were surprised to learn that magician Harry Houdini had enlisted the help of McAllister back in 1914.

As the story goes, Houdini was forbidden to perform his Underwater Box Escape act off of the piers, so he used a McAllister tug, invited the press on board and performed the act on July 15, 1914 off of Battery Park.

The act involved his hands being cuffed and his legs shackled. Once Houdini was in, the box was closed and nailed shut, rope was tied around it and it was weighed down before being lowered into the river.

According to a 1914 New York Times article, Houdini was thrown into the water from the tug J.A. McAllister. The Times reports that 15,000 came to watch Houdini perform the stunt off of Battery Park, where he reappeared on the surface of the water in a minute.

Resiliency in the Face of Adversity
McAllister’s legacy will be in the next generation—not only of McAllisters but of future mariners as well. The company is involved in both the PVA (Passenger Vessel Association) and AWO (American Waterways Operators).  It is also a co-sponsor, along with Morty Bouchard, for the Cafeteria at SUNY Maritime, Fort Schuyler, Bronx, NY.  As the McAllisters put it, they want to invest in the industry’s future labor force. “We want to be here for the long haul.” Captain Brian is SUNY Maritime alumni.

As Buckley told our Marine Log audience, “resilience is the ability to both endure adversity and recover from a disabling event.” For McAllister Transportation and Towing, its trajectory hasn’t been easy. Throughout its 150-year history, it has faced trying times, but its real character shows in how the company manages to remain afloat in spite of what storm comes its way.