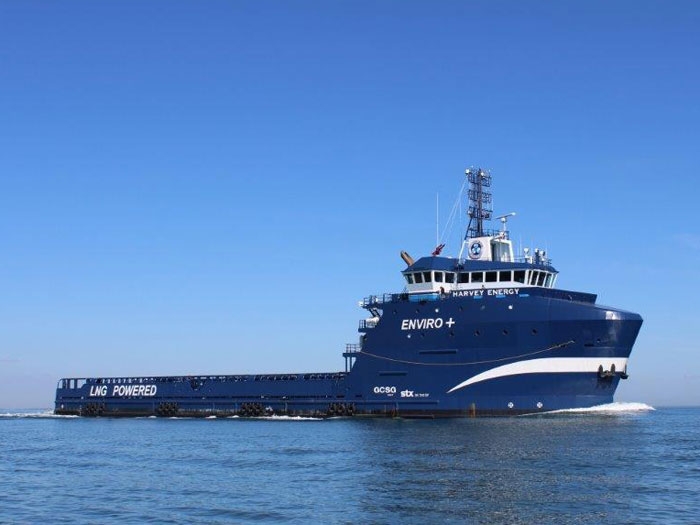 The first of six LNG fueled OSVs being built by GCSG for Harvey Gulf International Marine, Harvey Energy is capable of operating on LNG or diesel and is the result of a forward-thinking operator, complex engineering and sophisticated shipbuilding.

Along with being able to operate on LNG, she also meets the strident criteria of the ABS Enviro+, Green Passport notation. When operating on LNG, the vessel meets the new Tier IV sulfur and nitrogen oxide emissions regulations—part of the North American Emission Control Area (ECA).

Running on 99% LNG fuel (she is dual fuel), the vessel is able to operate for seven days before refueling with LNG at Harvey Gulf’s new LNG bunkering facility at Port Fourchon in southern Louisiana which allows easy access to more than 600 oil and gas rigs and platforms within a 40-mile radius.

“The culmination of innovation represented by her successful operation on LNG, Harvey Energy is a source of great pride for the employees of Gulf Coast Shipyard Group,” says GCSB President John Dane III. “The vessel represents the highest form of meeting market, regulatory and environmental demand with solutions for each. We are honored to be part of this historic vessel, setting new building standards for our clients and working in partnership with pioneering companies like Harvey Gulf.” Mr. Shane Guidry, Chairman and CEO of Harvey Gulf, comments, “The realization of the first OSV capable of operating on LNG is an example of Harvey Gulf’s commitment to its customers and the environment to provide the most affordable, innovative, environmentally-friendly technology solutions to meet their business demands.”