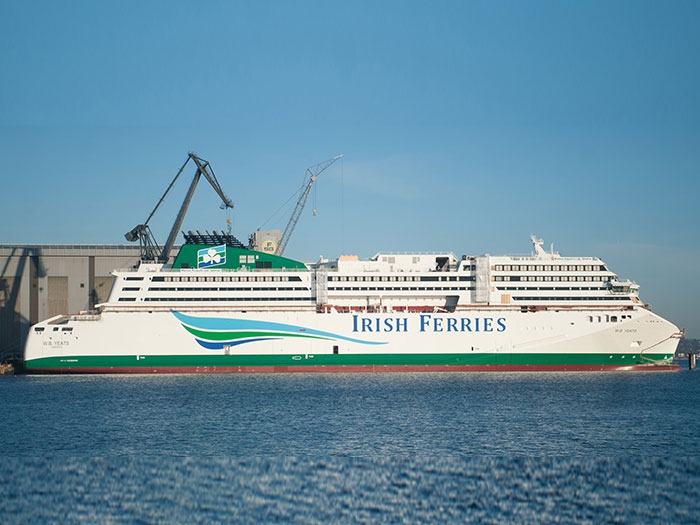 W.B. Yeats alongside at FSG

Set to be the largest and most luxurious ferry ever to sail on the Irish Sea, the 194.8 m x 31.6 m vessel will have space for 1,885 passengers and crew, 435 cabins including luxury suites with their own private balconies, and almost 3 km of car deck space.

Irish Ferries says that “because of the uncertainty caused by this additional delay,” it has “no option but to cancel all the planned sailings to France for W.B. Yeats this Summer, with the ship now likely to commence sailing with Irish Ferries on Dublin / Holyhead as scheduled in September.”

Approximately 6,000 bookings will be impacted.

Irish Ferries was previously forced to cancel July sailings for the W.B. Yeats when it was informed in April by FSG, of the initial delay. Approximately 2,500 bookings were impacted by the earlier cancellation, however, 95% of those chose to switch to Irish Ferries’ other cruise ferry, the Oscar Wilde.

A statement from shipbuilder FSG said that “due to delays in the delivery of interior components for public areas and on the electrical system installation in the hull and deckhouse, work on the new build NB771 W.B.Yeats will continue for a few weeks. Entry into service is now planned for September 2018.”

FSG CEO Rüdiger Fuchs said: “All the key functions of our shipyard and our key suppliers are on the ship, and meet daily to ensure direct and efficient communication. Our team is fully focused on completing this first of two large passenger ferries which ICG has ordered from FSG.”

To overcome delays in the delivery of interior components intended for the public areas of the ferry, FSG has made additional funds available to pay second level suppliers directly.