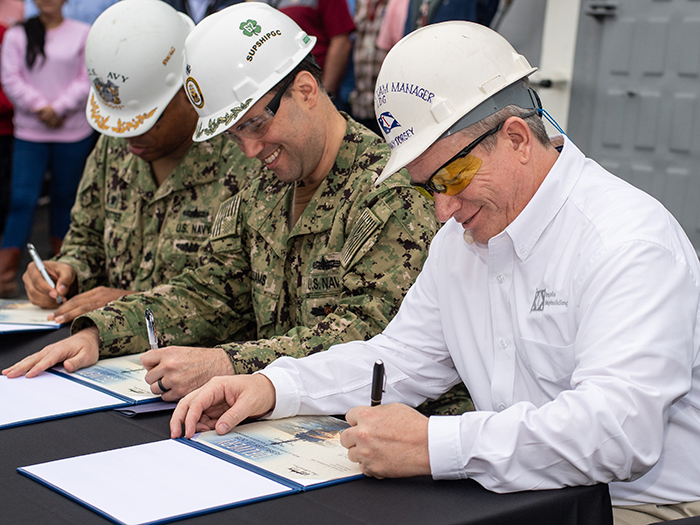 Accepting delivery of DDG 117 represents the official transfer of the ship from the shipbuilder to the Navy. Prior to delivery, the ship conducted a series of at-sea and pier-side trials to demonstrate its material and operational readiness.

The 67th Arleigh Burke class destroyer honors Paul Robert Ignatius, who served in the U.S. Navy during World War II, as Secretary of the Navy from 1967- 1969, and as Assistant Secretary of Defense during the Lyndon B. Johnson administration.

“Our industry partners have delivered another highly capable platform that will provide our sailors and nation with warfighting lethality for the next four decades.” said Capt. Casey Moton, DDG 51 class program manager, Program Executive Office (PEO) Ships. “We are proud to accept delivery of Paul Ignatius and look forward to her Commissioning ceremony later this summer.”

“This event is the culmination of hard work and dedication by thousands of shipbuilders, industry partners from nearly every state, as well as our Navy SUPSHIP Gulf Coast shipmates who worked with us each and every day to ensure DDG 117 became a mission-capable ship,” said George Nungesser, Ingalls’ DDG program manager. “Today, we deliver DDG 117 to the U.S. Navy—our 31st time to do this with an Aegis destroyer and well over our 80th time to deliver a Navy surface combatant on the banks of the Pascagoula River. It’s an honor to be a part of this great tradition.”