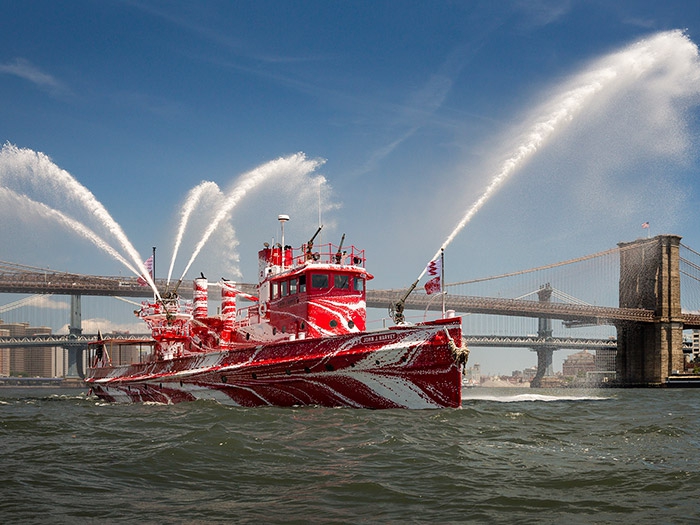 The John J. Harvey dazzle project was co-commissioned by New York City’s Public Art Fund and 14-18 NOW, a United Kingdom public arts program commemorating the centenary of World War I. 14-18 NOW has commissioned the presentation of four Dazzle Ships throughout the U.K., but the John J, Harvey is the first U.S.-based ship to be dazzled and the final vessel in the series before the 100th anniversary of the end of World War I on November 11, 2018.

The exterior of the fireboat has been painted with two patterns that the artist generated through the intricate process of marbling paper and that maintain the fireboat’s red and white palette.

Paint and coatings company AkzoNobel supplied the paint for the project.

“At AkzoNobel, we are passionate about paint. We are proud to support this unique project with our ‘International’ brand paint and see dazzling patterns in red and white come to life on the John J. Harvey,” says Chuck Hampton, AkzoNobel’s Regional Business Director, Marine & Protective Coatings North America. “The artful beautification of this historic fireboat thanks to the talented Tauba Auerbach has created a unique exhibition in which the public can now experience this vessel in a re-imagined way.”

From July through late September, the John J. Harvey will be docked at two locations: Brooklyn Bridge Park’s Pier 6 and Hudson River Park’s Pier 25. On weekends, the public will be able to board the boat to experience the dazzled design up close, and free timed trips around different parts of New York Harbor from each location will be offered, creating a special experience with a contemporary artwork and historic vessel.

During the winter and spring months, the boat will be docked at its home location at Hudson River Park’s Pier 66a in Chelsea and will act as a floating sculpture that the public may view from land or water. Visitors can reserve tickets online.

For more information about locations and to reserve tickets, visit PublicArtFund.org.