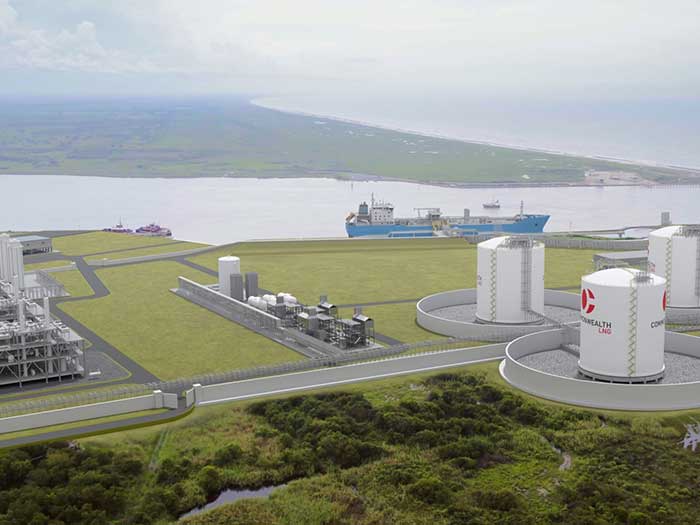 Cameron’s planned facility will have six 40,000 cu.m modular storage tanks and will be able to accommodate vessels up to 216,000 cu.m

Geneva-headquartered global commodities trader Gunvor has entered an agreement with Houston-headquartered Commonwealth LNG, which is planning to build an 8.4 MTPA liquefied natural gas (LNG) export terminal on the west bank of the Calcasieu Ship Channel at the mouth of the Gulf of Mexico near Cameron, La. The facility will have six 40,000 cu.m modular storage tanks and will be able to accommodate vessels up to 216,000 cu.m Gas supply is achieved with the addition of a 3.0-mile pipeline interconnected to two major pipeline systems with significant excess transportation capacity.

“In this highly competitive market, it is critical for companies – particularly ones pursuing an LNG greenfield project – to recognize their core competencies and strengths,” said Kalpesh Patel, Gunvor Co-Head of LNG Trading. “Commonwealth LNG’s engineering and procurement team is best in class. And, now, with the comprehensive support of Gunvor’s LNG and U.S. Gas marketing team, Commonwealth LNG will excel not only at controlling costs and project execution, but also at commercializing their project and creating the lowest cost offering on the US Gulf Coast.

“We are very pleased to announce this strategic partnership with Gunvor, the most active LNG trader in the world,” said Paul Varello, Commonwealth’s President and CEO. “We believe Gunvor’s substantial capabilities in LNG marketing and overall market presence, coupled with Commonwealth’s strengths in engineering, construction and project execution create a dynamic combination that ultimately differentiates Commonwealth from every other U.S. LNG project currently chasing FID [Final Investment Decision].”

Commonwealth LNG expects to take a final investment decision on its project in first quarter of 2021 deliver its first shipments of LNG in second quarter 2024.