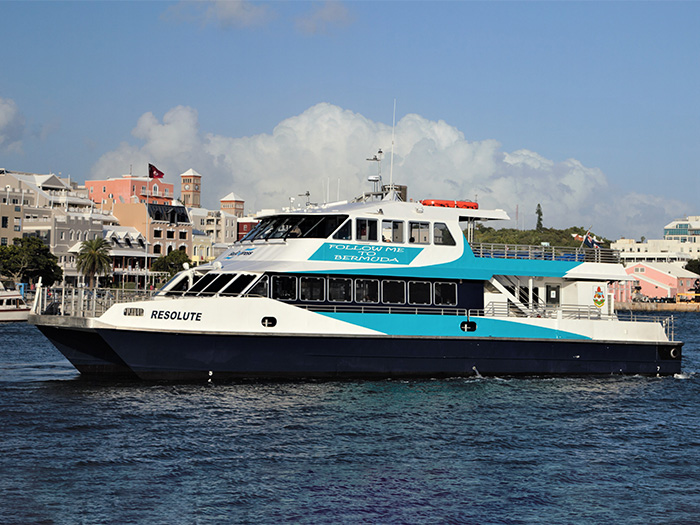 Resolute has returned to service repainted with fresh livery

Resolute, one of two high-speed passenger catamaran ferries delivered by Gladding-Hearn Shipbuilding, Duclos Corporation, to the Government of Bermuda, Ministry on Transport in 2002, has returned to service after a compete refit at the Somerset, Mass., shipyard. Now, the vessel’s sister ship, Serenity, has been delivered to the shipyard for the same types of upgrades—scheduled for completion by next March.

Each catamaran hull was equipped with a new Northern Lights 40 kW generator, along with new mechanical and electrical support systems.

The existing hydraulic steering was replaced with a new Kobelt hydraulic system.

The repowered ferry has a service speed of 27 knots with a fully-loaded deadweight of 20 metric tonnes at a conservative 85% power.

The passenger accommodations were completely refreshed and updated. In the main cabin, which seats 110 passengers, the Beurteaux seats were reupholstered, interior bulkheads relined and the carpeting replaced. New Dampa Marine ceiling tiles replaced the old linear panel ceiling. All the windows were replaced.

Throughout the vessel the AC and DC lighting systems were replaced with LED lighting. The existing 150,000 Btu HVAC system received new condensers and evaporators.

The two passenger heads were completely refitted with new fixtures and linings, and the black- and gray-water-holding capacity increased to comply with zero discharge requirements.mm

Seats on the on the partially-covered second deck, which seats 98 passengers, were removed and reupholstered.

The vessel’s exterior paint was completely recoated with a new livery.

The refit was managed on behalf of the Bermuda Government by its Marine and Port Services staff, and inspected to Lloyd’s Register class.