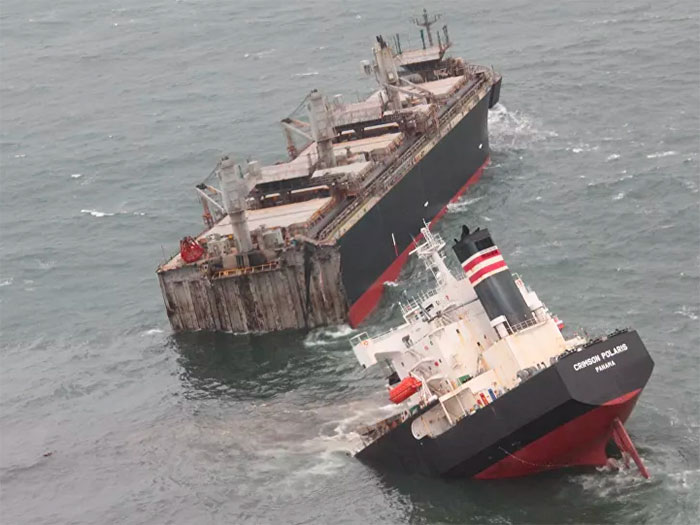 Oil from the vessel started to leak into the ocean after it spilt into two sections [Image: Second Regional Coast Guard Headquarters, Japan Coast Guard]

The Japan Times reports that oil from a wood chip carrier that broke apart off the Japanese coast has reached the shore of Misawa in Aomori Prefecture.

The incident began August 11, when the dedicated wood-chip carrier Crimson Polaris was swept away by a strong wind while anchored and subsequently ran aground off Hachinohe in Aomori prefecture at around 7:35 am (JST) on August 11. At 4.15 a.m. the next day, the hull of the vessel split in two and oil started to leak into the ocean.

All 21 members of the vessel’s Chinese and Filipino crew were safely evacuated from the ship by the Japanese Coast Guard prior to the break up.

The 2003-built Panama-flagged ship, owned by MI-DAS Line S.A. and managed by Misuga Kaiun Co. Ltd., is currently on charter to NYK Line, which has organized a crisis management center led by its president, Hitoshi Nagasawa, to address the situation.

In its most recent statement, issued at 7.00 p.m. local time on August 12, NYK said that as of August 11, when the ship grounded, it had approximately 1,550 tonnes of heavy oil and 130 tonnes of light oil as fuel.

“At this time, the amount of oil that has been washed away has not been identified,” said the statement.

The statement said that a crack that occurred near the space between the No. 5 cargo hold and the No. 6 cargo hold at the rear of the hull progressed and [the ship] was divided into two parts (the bow and the stern). The divided bow is suspended by an anchor chain, and the stern seems to have landed on the seabed.

NYK added that, in regard to towing and salvage efforts, the ship’s owner and the ship management company, along with the relevant authorities and salvage companies, are currently assessing the situation, with the prevention of environmental pollution as the highest priority.