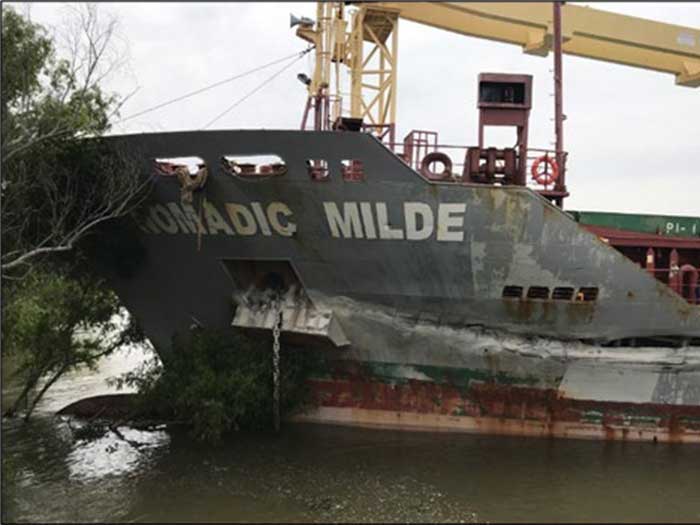 Damaged sustained by Nomadic Milde included a gash in the hull aft of the port anchor pocket. [USCG photograph].

The National Transportation Safety Board has issued its report on a May 8, 2020, incident in which, at about 4.55 p.m. local time, the anchored general cargo vessel Nomadic Milde collided with the anchored bulk carrier Atlantic Venus on the Lower Mississippi River near New Orleans, La.

After the Nomadic Milde began to swing and drag its anchors in the current, it collided with the Atlantic Venus, which had been anchored directly behind it, and then struck a nearby chemical dock and grounded on the bank. No injuries were reported. The Nomadic Milde released an estimated 13 gallons of lube oil into the river. Damage to both vessels and the dock was estimated at $16.9 million.

In its analysis the NTSB says that the Nomadic Milde’s positions and headings suggested that the ship did not initially settle at its original anchor position.

“After the starboard anchor was let go, the ship moved about 730 feet away from the original starboard anchor drop position towards the right descending bank, a distance double the amount of chain that was set on the anchor, indicating that the starboard anchor likely dragged. The initial 6-minute anchor drag began within 10 minutes of when the pilot had informed the master that the anchoring was finished,” says the report. “The pilot departed the bridge while the vessel was still moving, although he said he had no concerns about the Nomadic Milde holding anchor. Had he noticed the initial drag of the Nomadic Milde, he may have remained with the vessel. Additionally, had the bridge team detected the initial drag before the pilot departed the vessel, or if the master had voiced any concern, they may have been able to request that the pilot remain with the ship to attend to the issue.

“The second officer and chief officer both stated that the ECDIS was their means to monitor the Nomadic Milde’s position at anchor. Monitoring a ship at anchor, especially in an area where the risks of nearby hazards and weather and current are present, requires a continuous state of vigilance and the use of all available means to determine whether a vessel is dragging or not. The second officer had set an ECDIS anchor watch alarm, which would have sounded had the vessel moved beyond the set radius. Neither the second officer nor chief officer recalled hearing the anchor alarm activate, and, given that the initial estimated distance from the stern of the Nomadic Milde to the bow of the Atlantic Venus was 490 feet, the anchor watch alarm radius setting of 590 feet was too large to provide for a timely alarm of the ship dragging. From 1551 to 1557, just before the change of the watch between the second officer and chief officer at 1602, the ship began to swing to starboard and dragged anchor, moving about 800 feet over about 6 minutes. Although the chief officer noticed that the vessel was not in the center of the anchor watch circle when he relieved the watch, he did not question if the ship had dragged or check whether the ship was remaining securely at anchor.

“The officers on anchor watch on the Nomadic Milde had adequate time and means to check whether the ship was remaining securely at anchor. At the watch relief, the chief officer did not cross-check the ship’s position after he noticed that the Nomadic Milde was not in the middle of the ECDIS anchor watch circle. Even after the initial alert by the Atlantic Venus to monitor their holding position, the chief officer did not take any follow-up action to address the concern, only communicating that their engines were ready on short notice. There was no evidence of either watch officer checking the ship’s position at frequent intervals or by means other than the ECDIS watch alarm to determine if the ship was secure at anchor or not. Although ECDIS is a useful tool in determining a ship’s position at anchor, the ship’s radars would have provided information for the crew to determine or crosscheck if the range to a vessel or object had decreased, or if the ship had moved while at anchor. There was sufficient evidence to alert the bridge team that the Nomadic Milde was not holding well, and, had this been detected, the master could have been alerted earlier, and, in turn, there would have been sufficient time to undertake necessary measures to address the problem.

“By the time the Nomadic Milde’s master was called to the bridge, he had lost about half the original distance between his vessel and the Atlantic Venus in which to react to and mitigate the situation. Knowing that a pilot was required to get under way in the Lower Mississippi River, he contacted New Orleans VTS and the ship’s agent to request a pilot but was informed he would have to wait hours. Seven minutes before the collision, the main engine was ready for use on the bridge—but VTS had told the Nomadic Milde not to heave anchor and to maneuver only with their engine until a pilot arrived. The master followed the instructions from VTS, keeping the anchors out. However, this severely limited the bridge team’s ability to control the vessel in the strong current, even while using the main engine up to full ahead, the bow thruster, and rudder.”

The National Transportation Safety Board determines that the probable cause of the collision between the Nomadic Milde and Atlantic Venus was the bridge team on the Nomadic Milde not effectively monitoring the vessel’s position and therefore not detecting that the vessel was dragging anchor and had moved from its original position during high-water conditions in proximity to other vessels.