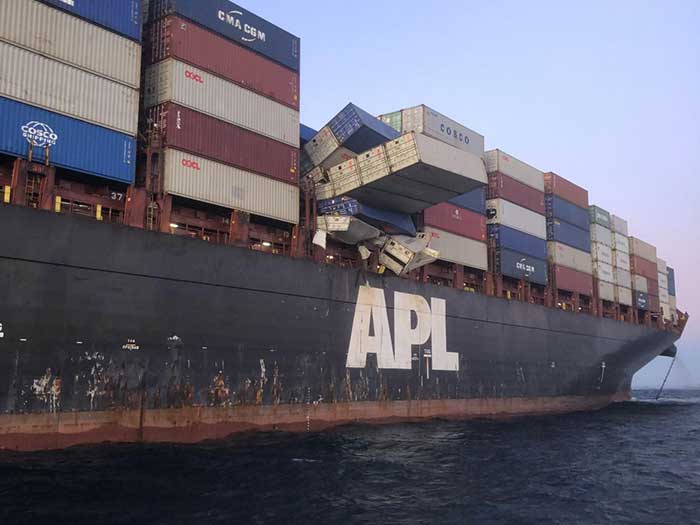 Just under a year ago, the problems caused by containers falling into the sea were in the headlines when the Australian Maritime Safety Authority reported that an APL containership had lost 40 boxes off the coast of New South Wales.

New measures to mitigate such losses were on the agenda at the May 5-14 meeting of IMO’s Maritime Safety Committee (MSC 103).

Reporting on the meeting, BIMCO’s Jeppe Skovbakke Juhl notes that containers lost at sea represent a potential danger to maritime safety and is a threat to the environment, particularly with regard to the plastics they contain. Over the course of three months late last year and early this year, almost 3,500 containers were lost in a number of incidents in the Western Pacific. This is far above the numbers usually registered for the same period and has raised concern regarding the causes of these incidents.

The causes that can lead to the loss of containers at sea vary. They may be due to bad weather conditions or high waves creating instability on board.

It is also difficult to have precise figures on the number of containers lost, particularly as container visibility from the bridge may be limited by the containers themselves, and only the upper tiers and the nearest bays can be seen.

When a relatively distant stack of containers collapses, it is difficult to determine immediately and precisely how many containers are involved and when they fell. These events generally occur in adverse weather conditions that prevent immediate on-site investigation. For the crew, it is extremely dangerous to walk along unstable container stacks.

The MSC therefore agreed to initiate new measures to detect and report containers lost at sea, which may enhance the positioning, tracking and recovery of such containers. It also agreed to establish a compulsory system requiring the loss of containers to be declared and the setting up on board of measures to easily identify the exact number of losses.

Along with installing such a system, ships would be obliged to report the loss of (a) container(s) through a standardized procedure, possibly detailing, e.g. identification, cargo carried (particularly dangerous goods or harmful substances), or whether these containers may float and constitute a risk of collision with ships and boats.

Over the next couple of years, the IMO will develop the measures needed to prevent containers falling into the sea in the first place, and to restore confidence in the safety of container transport with the present fleet.