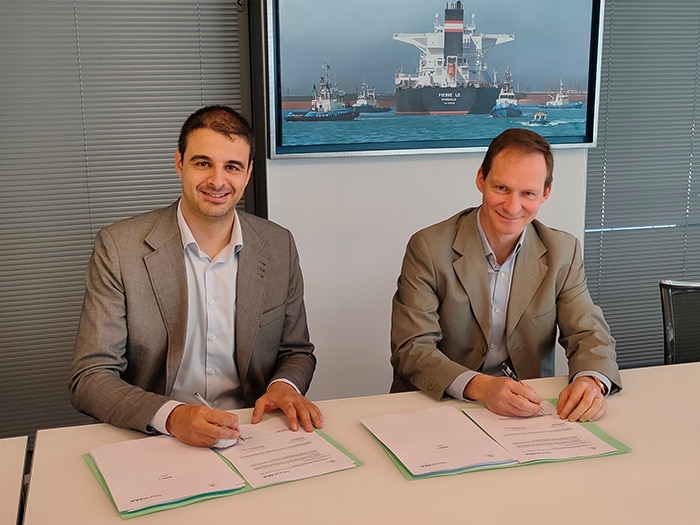 French ship operator Louis Dreyfus Armateurs (LDA) is to equip one of its vessels with three of the eSAIL suction sail systems developed by Barcelona, Spain, headquartered bound4Blue.

The eSAIL technology is based on active boundary layer control using suction. When exposed to wind, with the suction off, it only produces drag as with any other non-lifting structure. However, says bound4blue, “when the suction is activated, a small amount of air is sucked in, which re-adheres the airflow to the sail, generating enormous amounts of lift with low drag.”

The eSAIL is claimed to produce 6-7 times more lift than a conventional sail, with minimal power consumption and no mechanical complexity.

The agreement with LDA is the second to be announced by bound4Blue this year. It follows one reached in March that will see Netherlands-based short sea shipping specialist Amasus Shipping fit a 91-meter general cargo ship with two 17 meter high eSAILs.

The collaboration between bound4blue and LDA began more than three years ago,

Both companies worked together during 2020 on a preliminary project to assess the viability of the installation on one of LDA’s vessels.

Meantime, financing to launch the project has been secured, with the support of the European Innovation Council (EIC) Acceleration Program. This will enable bound4blue’s technology to be installed on one of LDA’s vessels during 2023.

“We pay particular attention to the decarbonization of all our ships and are taking a proactive approach to study, develop and adopt solutions in this direction,” said Kamil Beffa, CEO of Louis Dreyfus Armateurs. “Our ship project management, engineering and innovation teams have been working for more than three years in partnership with bound4blue to implement an innovative and environmentally virtuous solution to assist in the propulsion of our ships. With the eSAIL system, the sail propulsion will take the form of boundary layer suction wing profiles and will take advantage of the apparent wind encountered by the vessel to generate additional thrust. This device should make it possible to generate substantial fuel savings. “

José Miguel Bermúdez, CEO of bound4blue, hailed the agreement as “a great milestone to expand our technology,” giving the company the possibility of scaling up its systems for larger ships and doing so with a top-tier shipowner.