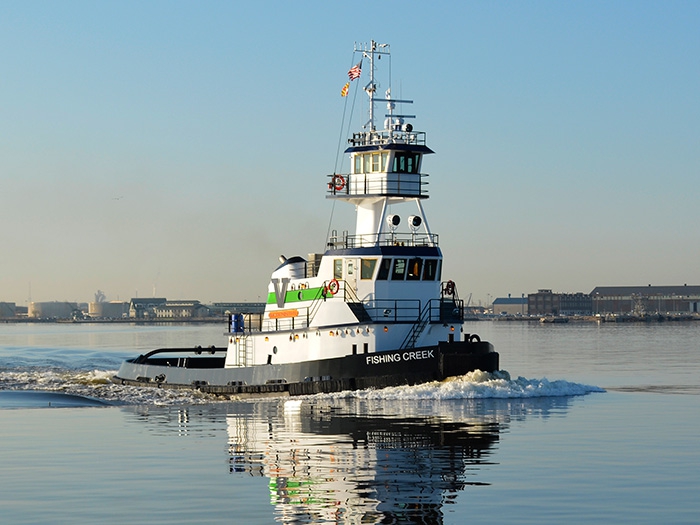 Measuring 94 feet long and 32 feet wide with a hull depth of 13 feet, the Fishing Creek is similar in most respects to the previous tugs in the Sassafras series

Designed by Frank Basile, P.E., of Entech Designs, LLC, the Fishing Creek is the thirteenth of 20 Sassafras Class tugboats contracted by Vane at Chesapeake Shipbuilding of Salisbury, MD. The first, the Sassafras, delivered in 2008, was considered to be the first tugboat constructed in Maryland in more than 30 years and the first ocean-service tug built in the state in more than a half century.

Measuring 94 feet long and 32 feet wide with a hull depth of 13 feet, the Fishing Creek is similar in most respects to the previous tugs in the series.

The vessel is equipped with twin Caterpillar 3512 Tier 3 main engines that provide a combined 3,000 horsepower, and operates with a JonRie Series 500 hydraulic towing winch.

State-of-the-art componentry is at the captain’s fingertips in the wheelhouse, which features mostly wooden accents for a more traditional look.

“Frank Basile and Entech gave us such a great design from which to work 10 years ago that we have made very few changes along the way,” says Vane Brothers Senior Port Captain Jim Demske, who oversees the tugboat construction program. “And keeping these beautiful tugs similar in construction is a great benefit to our crews, purchasing agents and contracted vendors. The tugs are both powerful and practical.”

Next in line from Chesapeake Shipbuilding is the tugboat Cape May, scheduled for delivery this summer.

The Fishing Creek has joined the company’s Philadelphia-based Delta Fleet and will primarily be used for towing petroleum bargesin the North Atlantic coastwise trade.