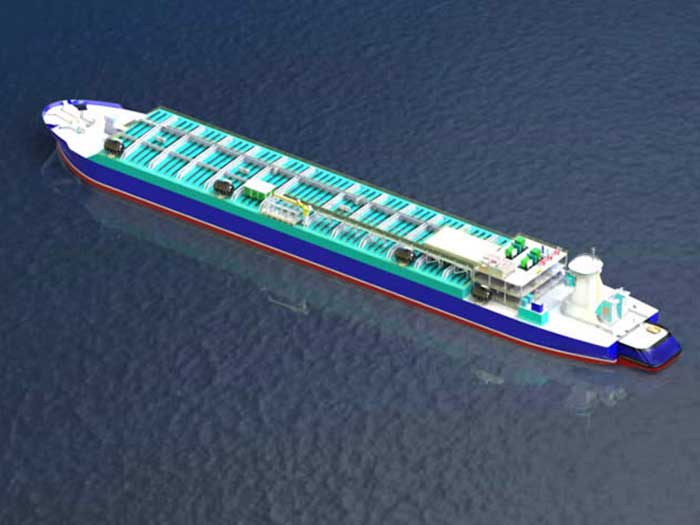 According to SeaOne, the 260 m vessels will be be the world’s largest and most powerful ATBs and will operate in the Caribbean and Central American regions. They will be used to transport and deliver a CGL (Compressed Gas Liquid) cargo to customers in support of the SeaOne Caribbean Fuels Supply Project and will feature SeaOne’s patented CGL technology and systems that includes the CGL containment system.

The CGL Containment System is treated as an independent cargo and is not integral to the vessel design. The ATB cargo holds will be kept at a temperature of minus 40º C while the containment system is full, resulting in no sloshing or boil off and no retention of a gas blanket after offloading of the cargo.

To meet cargo delivery requirements, the ATBs will be fitted with IMO Tier III diesel engines sized to give the vessels a service speed of over 14 knots.

“SeaOne has been working with SHI for a while now and we have found them to be a proactive company that listens to new ideas in the gas and liquids transportation business and provides constructive input into the design of the CGL transportation vessels. We are pleased to have SHI as part of the project,” said Dr. Bruce Hall, President and COO for SeaOne.

“We are delighted to participate in SeaOne Caribbean’s Fuels Supply Project with the construction and supply of the articulated tug and barges, and hope to build a lasting relationship with SeaOne hereafter,” said Daniel Cho, Vice President of Samsung Heavy Industries’ Rig & Industrial Ship Marketing.

Classification society ABS has worked with SeaOne from the outset of the project to help ensure the vessels will comply with the highest standards of construction and safe operation.

The ATBs, designed by Ocean Tug & Barge Engineering Corp., will fly the flag of the Republic of the Marshall Islands.

The signing of the LOI for the ATBs is seen as a major milestone in SeaOne’s extensive Caribbean Fuels Supply Project. The project is being undertaken to develop an environmentally-friendly, lowest cost, and safe means of transporting gas and gas liquids together as a single cargo.