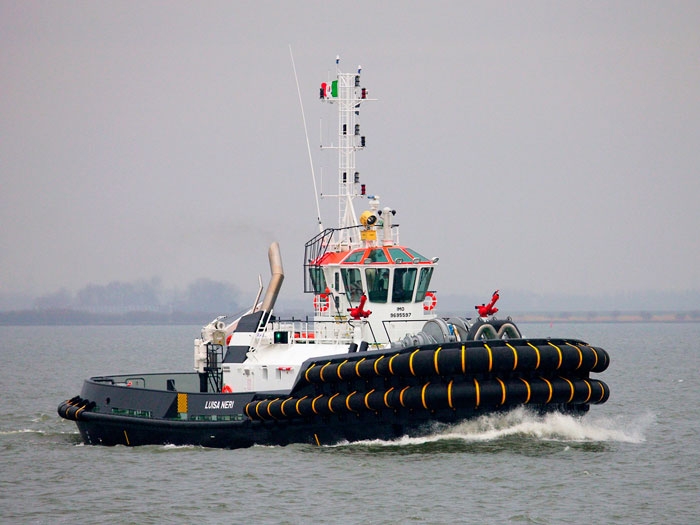 The vessel, the Luisa Neri, is Fratelli Neri’s first Damen newbuild tug and the first ASD tug in the Mediterranean with a Damen render-recovery winch.

The vessel was delivered just five months after the contract signing, with Damen Maaskant carrying out the final outfitting work on a built-for-stock vessel to customize it to client specifications. Modifications included the installation of a deck crane and all equipment necessary to comply with FiFi 1 notation, Oil Recovery notation and Italian flag.

Fratelli Neri, one of the largest tug owners in Italy, will be putting the Luisa Neri to use in its home port of Livorno.

“With some tight turns, Livorno is well known for being quite a challenging harbor to operate in,” comments Damen Regional Sales Manager Andrea Trevisan. “The Luisa Neri has the power – just over 80 tonnes of bollard pull – the maneuverability and the right equipment to handle these difficult escort duties though.”

The tug has a Damen render-recovery winch on the fore deck and a Damen towing winch on the aft deck. Both winches are designed and engineered by Damen Maaskant Shipyards Stellendam and produced by Damen Marine Components.

The winches allow operators to work in the toughest offshore conditions.

The render-recovery winch is a double drum anchor/towing winch, with 200 m of Dyneema towing wire on each drum. It is directly driven by two Hägglunds hydraulic motors connected to the main shaft.

The aft towing winch is a single drum winch, with 750 m of steel towing wire on the drum. It is directly driven by one Hägglunds hydraulic motor connected to the main shaft.As the winches are not provided with gearboxes the design is compact, robust and maintenance friendly.

Each winch drum can be connected to the deck by means of a hydraulically released, spring engaged band brake fitted on the outside of the stainless steel brake drum connected to the winch drum. An accumulator with sufficient capacity to release the band brakes several times is installed in the hydraulic system to guarantee a safe and fast quick-release operation of the winches in all operating conditions.

“The system prevents high peak loads in the towing wire during open water operations in sea conditions up to 3 m significant wave heights and 6 second wave periods, thus reducing the chance of the towing line breaking and making offshore towing and escorting duties much safer. It really is unique in the industry,” says Mr. van Schaik.

“The render-recovery winch also gives tug captains an outstanding degree of flexibility,” he continues. “They can work with various operating modes depending on the weather, the sea conditions and the work needed to be done. These modes are used to control either the distance or the forces acting between tug and the vessel it is assisting.”

Damen’s ASD Tug 3212 has excellent seakeeping characteristics and maneuverability and is optimized for operations in exposed waters.

The design consists of a large freeboard and more pronounced V-shaped frames in the lines of the fore ship. This, in combination with a more raised forecastle deck, ensures a relatively dry working deck.

Fratelli Neri is a family-owned company whose began at the end of the nineteenth century when Costante Neri was involved in the coal trade from the United Kingdom. He expanded operations with the acquisition of a 65 hp coal-powered tug to offer salvage and wreck removal services.

“The extremely flexible characteristics of this tug, the experience and the professional capacities of Damen Shipyards Group together with the experience of the crew are such as to make us confident that this new unit will be able to fulfil the duties it will be asked to perform in a ready, efficient and safe way,” says Fratelli Neri Managing Director, dott Piero Neri (great grandson of founder Costante Neri).