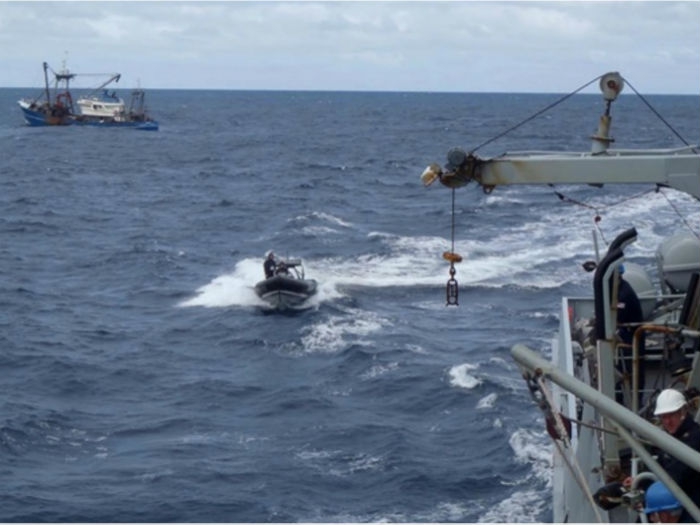 AUGUST 24, 2018 —The owners and master of the Dutch-registered salvage ship Friendship were fined a total of £250,000 after being convicted of trying to illegally take steel and copper from a WWI wreck, reports the Royal Navy.

The incident occurred back in August 2016 when HMS Severn was on patrol around the Scillies on the lookout for trawlers breaking international fishing regulations. The HMS Severn was asked to investigate the suspicious activities of the Friendship.

Instead of nets and beams plucking fish from the Atlantic, the crew of HMS Severn found the huge hydraulic claws of Dutch-registered salvage ship Friendship lifting £90,000 of steel and copper.

Once aboard the Dutch ship, Severn’s boarding team quickly determined the vessel’s master, Walter Bakker, had no license to salvage the wreck – so they impounded his vessel.

It took a scratch crew more than two days to sail Friendship to Fowey in Cornwall, where she and her illegal haul was handed over to the Maritime Management Organisation.

The metal was being stripped from the wreck of the SS Harrovian, sunk by a German submarine 80 miles southwest of the Scilly Isles in 1916.

The British steamer was heading from New York to Le Havre in France carrying various metals for the Allied war – including more than 1,000 tons of copper bars, worth around £5 million today – when she was intercepted by U-69.

After the crew were forced to abandon ship, the German submarine sank the Harrovian with its deck gun. No-one died in the sinking.

Building the case
The Royal Navy says that after the arrest of the Friendship, it took another 18 months to build a watertight case against Bakker and the boat’s owners – and six more months after that for sentence to be passed at Newcastle Crown Court.

Bakker admitted that he did not have the relevant license and explained how the ship’s Automatic Identification System (AIS) had been dimmed to avoid detection.

In addition, the judge, who stressed that the Harrovian was an important heritage asset to the nation and that the firm should pay more than £190,000 in compensation under a Proceeds of Crime Confiscation Order.

“It’s great news to hear the Friendship boarding resulted in a successful conviction – it was certainly one of the more memorable and unusual boardings we did. Well done, Severn shipmates!” said the U.S. Navy’s Lieutenant Angie Violante, who led the boarding of the salvage ship two summers ago while on exchange with the Royal Navy.

“It’s great to hear that the hard work of Severn has paid off with another successful conviction. The fact that it’s taken two years to complete the work reflects the unusual boarding – and the magnitude of the infringements,” said Commander Sarah Oakley, Commander of the Royal Navy’s Fishery Protection Squadron.