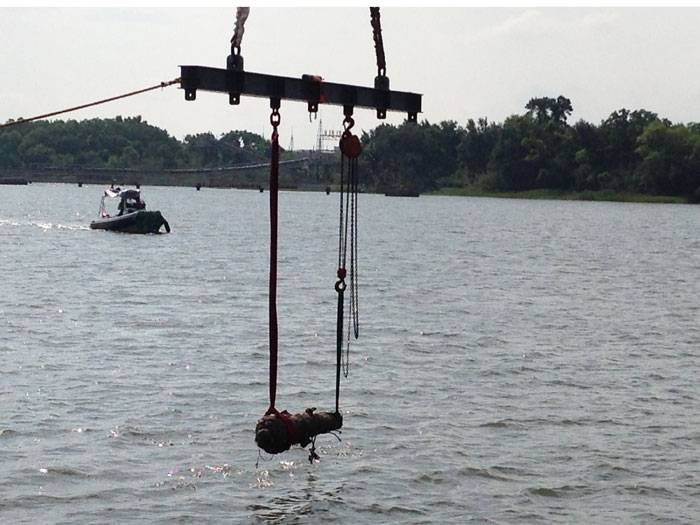 The U.S. Navy's Supervisor of Salvage and Diving provided salvage assistance to recover the first cannon from the Civil War-era Confederate States Ship Georgia on July 21. The cannon was rigged by U.S. Navy Explosive Ordnance Disposal divers in Savannah, Georgia harbor and deposited in a wet storage container for transport ashore and conservation

Built in Savannah, Georgia in 1862 (with the help of $115,000 in funding from the Ladies’ Gunboat Association) the CSS Georgia, was designed to be an ironclad warship and was deployed to defend the river channels below Savannah, using her cannons to prevent a Union advance on the city from the sea. However, her steam engines turned out to lack sufficient power for offensive use and she was then anchored in the Savannah River as a floating battery, protecting both the city and Fort Jackson. When the Georgia had been in service about 20 months, Savannah was taken by land on December 21, 1864, the crew scuttled her to prevent her capture.

In 1866 most of the ship’s railroad iron armor was salvaged, using underwater charges that shattered her wooden hull.

A proposed channel modification for the Savannah Harbor Expansion Project will impact the ship’s wreckage and prompted a request from the U.S. Army Corps of Engineers for recovery assistance. Sections of the hull, armor, elements of steam machinery and ordnance are the major surviving pieces of the ship.

“In addition to our personnel, we have unique equipment capabilities through our East Coast salvage contractor, Donjon Marine, and access to highly trained divers from Explosive Ordnance Disposal Mobile Unit Six and Mobile Diving and Salvage Unit Two,” said Rick Thiel, SUPSALV program manager. “To support a project of this magnitude, two barges are on site, one to serve as a diving and equipment platform and one to support artifact storage, sorting and transport. Our expertise allows us locate and safely recover artifacts and unexploded ordnance in such challenging conditions.”

To date, divers have successfully located and recovered 128 pieces of unexploded ordnance at the wreckage site. The team is currently concentrating on recovering the four cannons that surveys have shown to be at the site. The first cannon was raised July 15 and the second cannon was retrieved on July 21. Once all are brought to shore, technicians will support field inerting of the unexploded ordnance.
The SUPSALV team will be on site through October continuing to collect artifacts.
SUPSALV is responsible for Navy ocean engineering, including salvage, in-water ship repair, towing, diving safety and equipment maintenance and procurement.