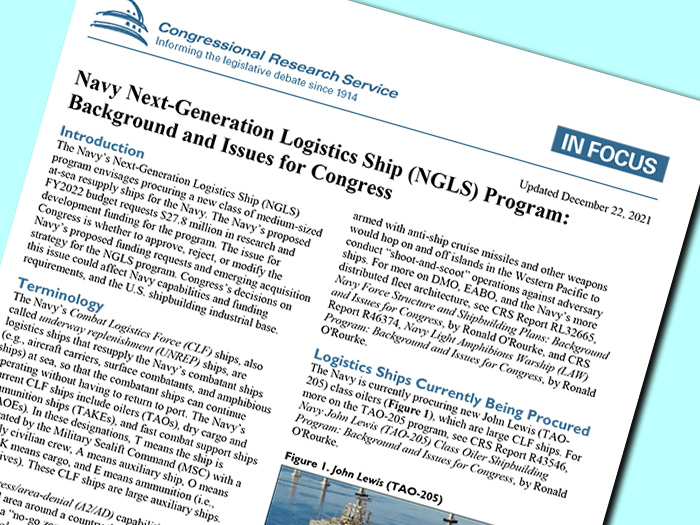 Usually, the Navy awards these types of studies to several shipbuilders, but thus far no other shipyards have chosen to disclose whether they have received similar awards. If the Navy has made any announcement, it has done so discretely that it has even escaped the eagle eye of veteran Congressional Research Service (CRS) analyst Ronald O’Rourke.

The report quotes a DoD budge document as saying:

“The Next Generation Logistics Ship (NGLS) is planned to be a new class of ships to augment the current Combat Logistics Force ships, through the use of commercial ship designs tailored for military applications to conduct logistics missions. The NGLS will enable refueling, rearming, and resupply of Naval assets—afloat and ashore—in support of Distributed Maritime Operations, Littoral Operations Contested Environment, and Expeditionary Advanced Base Operations. The NGLS is envisioned to be smaller than existing ships in the Combat Logistics Force, and will operate near contested environments, sustaining afloat (Surface Action Group) and ashore (Expeditionary Advanced Base) requirements. NGLS is potentially a family of vessels with commercial designs tailored for military applications. RDT&E [research, development, test, and evaluation] funding will continue to support requirements trade-off studies, development of indicative [i.e., notional] designs, specification development, and demonstrations of experimentation and proof-of-concepts focused on the Refuel, Resupply, and Rearm logistics missions.”

The CRS report says that the Navy’s Fleet Readiness and Logistics office approved the top-level requirements (i.e., major required features) for the NGLS in March 2020. These “envision NGLSs being built in two variants: a Platform Supply Vessel (PSV) variant and a Fast Supply Vessel (FSV) variant. The two variants would perform the same missions, but the FSV variant would be smaller and faster than the PSV variant. The Navy states that commercial PSVs and FSVs are potential design solutions for the NGLS program, but that the Navy is not limiting the potential solution to those types of vessels.”