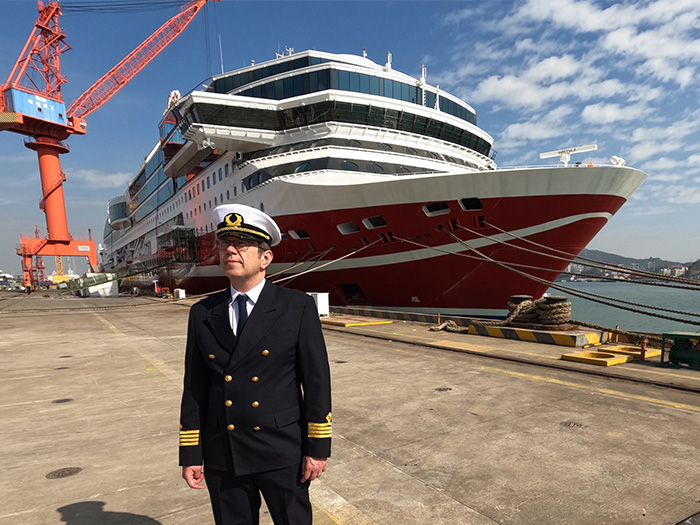 Billed as “packed with climate smarts,” the ship is expected to use up to 10% less fuel than the line’s Viking Grace, which was previously honored as the world’s most environmentally friendly passenger ship.

The vessel is being sailed to its home berth by Capt. Ulf Lindroos and a crew of 40. The trip will take nearly five weeks. After crossing the Indian Ocean, Viking Glory will sail to the Mediterranean Sea via the Suez Canal and after passing Gibraltar will head north and reach the Baltic Sea via the Danish straits. The vessel’s cruising speed is an average of 16 knots, and the journey home will take nearly five weeks.

“Glory’s journey home is an exciting, special task that has required meticulous planning and special arrangements.” says Lindroos. “Over the course of the journey, the vessel will encounter a variety of weather conditions, and a long journey is also challenging in other ways. But we have experienced people on board with us who have sailed the seven seas, so we have been able to identify potential risks and draw up action plans with different situations in mind. Safety and financial considerations provide the framework for our route planning.”

Construction work will continue during the journey, with subcontractor personnel joining the ship en route.

Viking Glory was launched in January 2021 at the XSI shipyard in Xiamen, China. The vessel has completed two demanding sea trials. The first, in June, included a test run of ABB’s Azipod propulsion system, testing of the vessel’s maneuverability and confirmation that the lifeboats and fire alarm system work. The second sea trial included checks of all machinery systems with a focus on endurance. At the same time, the vessel’s noise and vibration levels were tested.