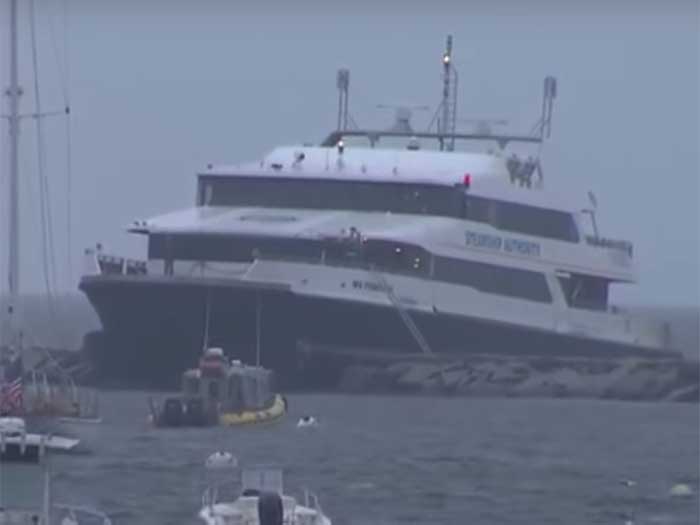 JUNE 19, 2017 — The Coast Guard teamed-up with local responders late Friday and early Saturday to rescue 55 people stranded aboard a high-speed ferry that hit a jetty while entering Hyannis Harbor.

The local fire department notified watchstanders at Coast Guard Sector Southeastern New England at about 9:30 p.m. Friday and reported that the Massachusetts Steamship Authority Ferry Iyanough, which serves Nantucket to Hyannis, struck the jetty and grounded on the rocks.

“Rough seas and strong winds overnight challenged responders, but with the help of our local partners, our boat and aircrews were able to get all passengers to safety,” said Lt. Cmdr. Matt Baker, the chief of incident management at Coast Guard Sector Southeastern New England.

Six people, including the ferry’s captain, engineer, and Coast Guard marine inspectors remained aboard Iyanough. A tugboat and a commercial towboat company were also on scene.

The Coast Guard will work with the Steam Ship Authority to assess Iyanough’s damage, and ensure safe navigation in the area. The cause of the grounding is under investigation.

The Steamship Authority issued this statement on the incident:

At approximately 9:30 pm on Friday, June 16th, the Steamship Authority fast ferry, the M/V Iyanough, struck a jetty as it entered Hyannis Harbor.

The ferry was traveling from Nantucket to Hyannis on its last trip of the day.

There were 48 passengers, 6 crew members and 3 food service workers on board the vessel at the time of the incident. Reports indicate 15 people were brought to Cape Cod hospital for various injuries. None of the injuries are said to be life-threatening.

Inclement weather, strong winds, and choppy seas are believed to have been complicating factors in the grounding of the vessel.

The Coast Guard is conducting interviews with the crew and passengers to learn the exact cause of the incident. The two licensed officers in charge of the M/V Iyanough at the time of the incident are veteran mariners with more than 60 years of experience between them.

“On behalf of the Steamship Authority, I thank the Coast Guard, all local first responders, the crew of the helicopter from Air Station Cape Cod, as well as the crew and passengers of the Iyanough who made the ferry’s evacuation safe and orderly under adverse conditions,” said Wayne Lamson, general manager of the Steamship Authority. “Our concerns, first and foremost, are the safety and well-being of our passengers, and we deeply appreciate the efforts of all who guided them safely to shore.”

Earlier today, the M/V Iyanough was freed from the jetty and brought into the Hyannis dock. This afternoon, the ferry will leave under its own power to Fairhaven for more extensive repairs that are expected to take at least two weeks. Despite the damage, there was no environmental impact due to last night’s grounding.

While the Iyanough is being repaired, the Steamship Authority will use its traditional ferries as well as other vessels it has chartered to minimize schedule disruptions.

Passengers are encouraged to check for any schedule changes and updates at www.steamshipauthority.com.