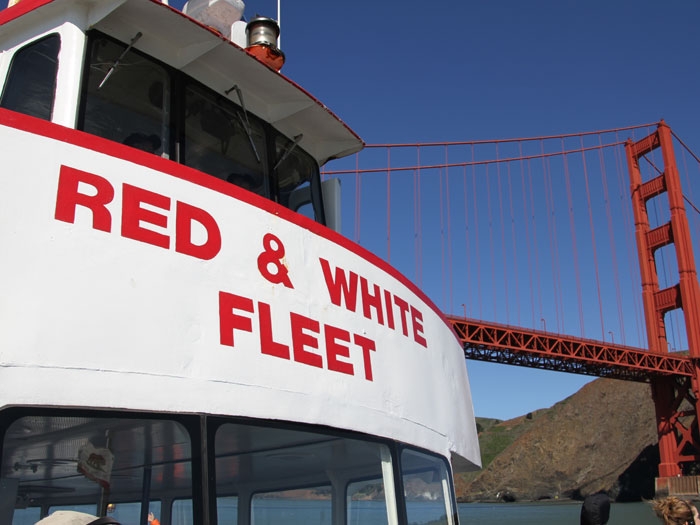 “Everyone is talking about reducing emissions by 20 percent, 40 percent or more,” says Red and White Fleet president Tom Escher. “I thought, ‘Why not do away with emissions altogether?’ “

The hydrogen refueling station is planned to be the largest in the world and serve fuel cell electric cars, buses and fleet vehicles in addition to the ferry and other maritime vehicles.

The U.S. Department of Transportation’s Maritime Administration (MARAD) is funding a feasibility study to examine the technical, regulatory and economic aspects of the project.

“The Maritime Administration is committed to finding new and efficient technologies for use in the maritime industry that reduce pollution and protect our environment,” says Maritime Administrator Paul “Chip” Jaenichen. “This industry continues moving forward on renewable energy and clean-fuel options, and this project encourages a shift toward lower impact maritime fuels that may further green the waterborne link in our national transportation system.”

Sandia is leading the study in partnership with Red and White Fleet, ABS, the U.S. Coast Guard and naval architect Elliott Bay Design Group. Other contributors include the California Environmental Protection Agency’s Air Resources Board and the Governor’s Office of Business and Economic Development.

“We are involving so many stakeholders up front because if the feasibility study shows a ‘go’ we want to make sure the next phase has a rock-solid foundation,” says mechanical engineer Joe Pratt, the Sandia project lead. “We hope that the feasibility study, regardless of the outcome, can be useful to others nationally and around the world who are looking at hydrogen fuel cell vessels as clean energy alternatives.”

Economic viability is essential to the success of SF-BREEZE.

“Rather than a tour boat that would primarily be a demonstration project, Red and White Fleet believes a high-speed passenger ferry makes economic sense,” Mr. Pratt says.

To compete with existing transportation methods — cars, buses, Bay Area Rapid Transit and other ferries — the ferry must be fast. But speed adds complexity.

“If you are trying to achieve speed, boat weight is important,” Mr. Pratt notes. “Fuel cells and hydrogen are heavier than existing diesel engines and fuel, so the question becomes can you build a boat powered by hydrogen fuel cells that is both large and fast enough? The feasibility study will provide that answer.”

A preliminary conceptual study shows the answer is probably yes, but it will require a boat specially designed to accommodate hydrogen fuel and the fuel cell technology.

A traditional passenger ferry can’t easily be retrofitted with a hydrogen fuel cell, so it was essential to include a naval architect in the feasibility study. The ferry design will include collaboration with the ABS and the Coast Guard to ensure the final design conforms to safety and reliability rules and regulations.

The economy of scale could boost the local hydrogen fuel cell marketplace.

“A larger station reduces the cost per kilogram of hydrogen,” says Mr. Pratt. “Higher use will drive down that cost even more.”

Reducing the cost of hydrogen refueling could stimulate the market for hydrogen fuel cell cars and accelerate wider adoption of the technology in other vehicle markets, such as heavy-duty trucks and buses.

“This project offers an opportunity to closely examine how hydrogen can take its rightful place as a clean, low-carbon fuel for high-volume transportation operations, and also build the business case as part of an innovative application for fuel cells,” says Catherine Dunwoody, chief of the Fuel Cell Program at the California Air Resources Board.

SF-BREEZE will enter new regulatory space, both for the high-speed ferry and refueling station. The feasibility study will examine those regulations and their impact on the project.

For the refueling station, Sandia can draw on its technical expertise in developing and optimizing safe, cost-effective vehicular hydrogen fueling stations. The U.S. Department of Energy Fuel Cell Technologies Office funds most of Sandia’s efforts in this area.  Sandia is a leading partner in two nationwide infrastructure initiatives: H2USA, a private-public partnership focused on advancing hydrogen infrastructure, and the Hydrogen Fueling Infrastructure Research and Station Technology (H2FIRST), a U.S. Department of Energy project established to support H2USA.

“The knowledge, tools and stakeholder resources we’ve cultivated through these initiatives will directly apply to developing the large, multi-use hydrogen refueling station,” says Mr. Pratt. “We will work closely with the Air Resources Board and the California Governor’s Office of Business and Economic Development to determine the best location for the refueling station and understand the associated regulations.”

Sandia leads the Maritime Fuel Cell project, which is piloting the use of a hydrogen fuel cell to power refrigerated containers on land and on transport barges at the Port of Honolulu (see earlier story).

“Working with ABS and the Coast Guard, we’ve explored some of the unique issues related to using a hydrogen fuel cell on a vessel and in the marine environment, “says Mr. Pratt. “But there is more at stake when the fuel cell is powering the boat, not an auxiliary system, and the boat is carrying passengers.”

If the feasibility study indicates that SF-BREEZE could succeed technically, economically and within regulations, the next step is to design the vessel. The project will need additional funding, resources and partners, which could come from the federal government, the state of California, investors, industry or priv”ate foundations.

Mr. Escher notes that if the project ultimately succeeds, it could hurt him financially.

“It will make all of my boats obsolete and I’ll have to replace my entire fleet,” he said. “But in all seriousness, this is really about preserving the environment for future generations.”

He hopes to continue Red and White’s tradition of leadership and environmental stewardship established by his grandfather Thomas Crowley, who started the company in 1892.

“I want to ride across the San Francisco Bay on a quiet, fast boat with no emissions,” he said. “If we get thirsty, we can drink the exhaust.”