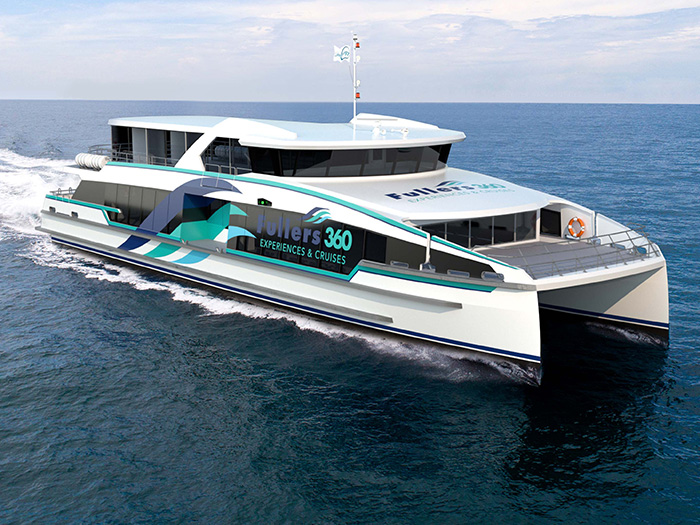 Auckland, New Zealand, operator Fullers360 has ordered its first plug-in electric hybrid ferry. Designed by Incat Crowther, the 34.6- by 9.5-meter vessel will carry 299 passenger and have a service speed of 22 knots. To be built by Whanganui, New Zealand, based Q-West Boat Builders, it will operate on Fuller360’s Devonport route, saving an expected 750,000 kg of CO2 annually.

The vessel’s drivetrain consists of four Danfoss EM-PMI540-T4000 electric motors directly mounted to Hamilton HTX42 water jets, with a 1,944 kWh battery pack. to achieve maximum speeds over 28 knots. An advanced energy management system controls the deployment of the system over a range of usage profiles.

As well as the primary electric-only profile, the vessel can extend its range by a mode directly feeding the propulsion motors from its two Scania DI16 070M/Danfoss EM-PMI540-T3000 generator sets, a mode that charges the batteries from the generators, and a hybrid boost mode that combines both sources.

The design is also compatible for retrofitting for operation on hydrogen fuel for increased range as that fuel becomes more widely available in the future.

The vessel cabin is modular, with the main deck configured for metro operations and overflow capacity to the upper deck.

Passenger access is centered around large midship boarding doors which are designed to mimic existing vessels and integrate with existing infrastructure. The vessel is also designed to be fully compatible with Auckland’s newly developed Downtown Ferry Basin terminal.

Once on board, a large vestibule adjoins an open area with fold-up seats that accommodate up to 28 bicycles, facilitating fast, smooth passenger flow. A café is located amidships while toilets are located aft.

The new vessel is Fullers360’s first step towards building a fleet that eliminates the use of fossils fuels in Auckland Harbor. New Zealand is a leading force in renewable energy, with over 80% of its energy coming from renewable sources such as hydro, wind and geothermal. As a result, the use of electric propulsion in the city’s public transportation gives an immediate reduction of emissions in comparison with diesel propulsion.