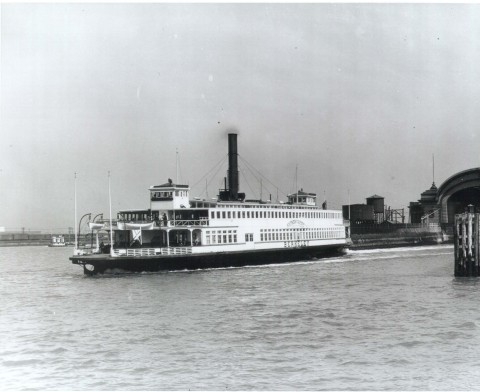 Berkeley as she appeared in the early 20th century

AUGUST 8, 2017 — The Maritime Museum of San Diego, has been awarded $200,000 in preservation project funding from the National Maritime Heritage Grant Program to preserve the 1898 steam ferry Berkeley. The grant program funds Maritime Heritage Education and Preservation Projects throughout the United States.

The steam ferry Berkeley, one of few vessels of its type still in existence, represents the era transition to steam-powered propulsion, with its 1,450 hp triple-expansion engine.

Built in 1898 by the Union Iron Works shipyard in San Francisco, the 279 ft x 64 ft Berkeley originally had seating for 1,691 passengers provided service between Oakland and San Francisco for nearly 60 years, including her role in evacuating thousands of San Francisco residents at the time of the great earthquake in 1906. The ship is both a State and National Historic Landmark, and received the Steamship Historical Society’s “Steamship of the Year” award in 2015.

Dr. Ray Ashley, CEO/President of the Maritime Museum of San Diego, said, “News of this latest National Maritime Heritage Grant is such an honor. This reflects how with devoted leadership, staff, volunteers and our community, we have for years united on a commitment to deliver a cultural and educational experience like no other, and together deliver on our mission to serve as the community memory of our seafaring experience by collecting, preserving, and presenting our rich maritime heritage and historic connections with the Pacific world.”

Berkeley received a prestigious Save America’s Treasures preservation award in 2011, which funded what was then a revolutionary preservation technique adapted from the offshore oil industry to coat the entire exposed outer surface of Berkeley’s hull with a ceramic/epoxy composite to eliminate further corrosion. Fifteen years later, the Museum says that this ground-breaking process has proved successful, and subsequently has been used on other metal-hulled historic vessels in the Museum’s fleet and throughout the United States.

Aboard the Berkeley are the museum’s offices, a major maritime research library, workshop, model shop, the museum store, special events venue with room for 800 guests, and numerous dry storage and archive areas.

The ferryboat’s lower deck and main deck contain many important exhibits and displays, including her fully restored triple expansion steam engine, which, although no longer steam-operated, today performs for visitors with the aid of hydraulics and compressed air.