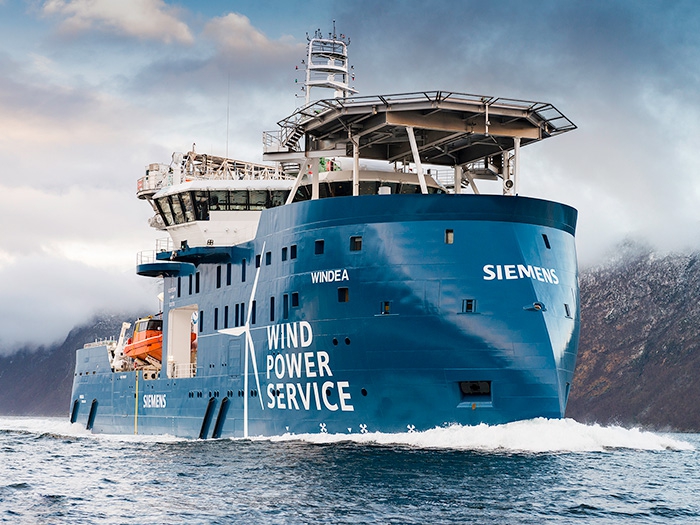 Starting in April, the vessel will work at the Sandbank wind farm in the German Bight for Siemens Wind Power Service to ensure the production of green energy from 72 wind turbines.

“The vessel has the X-Stern hull shape, which allows it to be positioned with the stern faced towards the weather instead of the bow only,” said Matthias Müller, Managing Director of Bernhard Schulte Offshore. “Her award-winning sister vessel Windea La Cour’, which is working in the Dutch Gemini wind farm since August, has already proven that this leads to improved weather resilience, greater operability and reduced power and fuel consumption while on DP mode next to the wind turbine.”

The vessel also features the Ulstein X-Bow, which has just been selected as the second most important Norwegian innovation of all time, being edged out of first place by the Tripp Trapp infant high chair, but bumping the cheese slicer unto the number three spot.

The jury gave the following explanation for why the X-Bow featured in the top 3: “The X-Bow is adapted to the tough conditions in the North Sea. The bow demonstrates the innovative capacity of Norwegian shipbuilding, and is a strong contribution to the maritime history. As a result of the bow, the ship can tackle all kinds of weather conditions, and it comes as a safe choice. The X-Bow is a great commercial success with more than 100 already in use all over the world.”

Main particulars of the vessel: