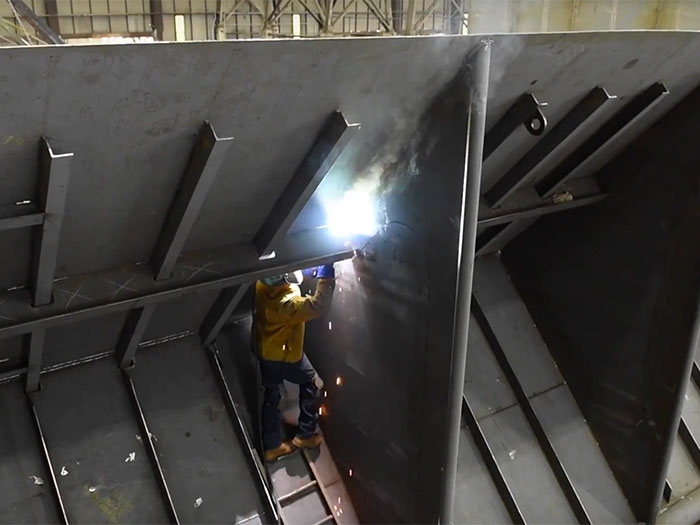 OCTOBER 2, 2018 — An 826 ton buoy under construction by shipbuilder Vigor in Oregon for Irish based wave power pioneer Ocean Energy has the potential to meet the power demands of energy hungry and rapidly expanding IoT technology companies and many others..

Called the OE Buoy, the 125 feet long, 68 feet tall, and 59 feet wide wave device, or “marine hydrokinetic convertor” is set for completion next spring, when it will be towed to the U.S. Navy Wave Energy Test Site on the windward coast of O’ahu, Hawaii.

The private sector project is supported by the U.S. and Irish governments and their agencies as part of an agreement committing both governments to collaborating on marine hydrokinetic technologies.

“This first-of-its kind wave energy convertor is scalable, reliable and capable of generating sustainable power to facilitate a range of use-cases that were previously unimaginable or just impractical,” says John McCarthy, Chief Executive Officer of Ocean Energy. “In the energy-hungry and rapidly expanding IoT world, technology companies will be able to benefit from wave power through the development of OE Buoy devices as marine-based data storage and processing centers. The major players in Big Data are already experimenting with subsea data centers to take advantage of the energy savings by cooling these systems in the sea. OE Buoy now presents them with the potential double-benefit of ocean cooling and ocean energy in the one device.”

The sustainability aspects of the OE Buoy project are significant. Each deployed commercial device could reduce CO2 emissions by over 3,600 tons annually, which for a utility-scale wave farm of 100 MW could amount to over 180,000 tons of CO2 in a full year.

Emerging industries such as offshore aquaculture could also benefit from wave energy as they require power at remote marine locations. Additionally, with safe drinking water shortages plaguing cities around the world, wave energy could potentially provide a highly cost-effective solution to providing the power needed for large scale desalination projects.