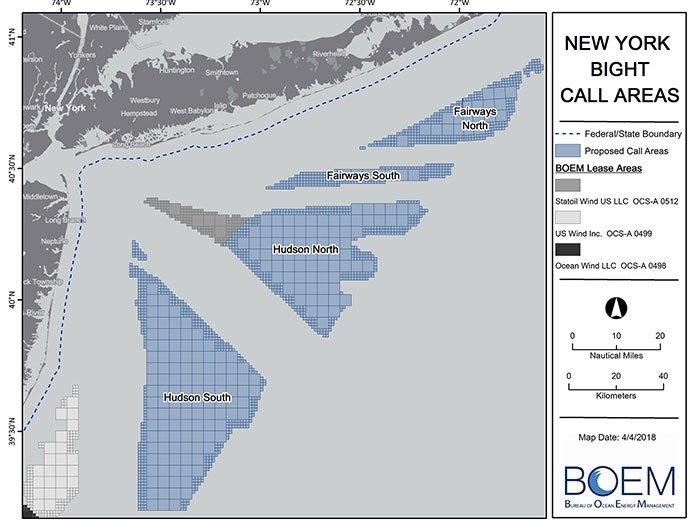 APRIL 10, 2018 — The Bureau of Ocean Energy Management (BOEM) is publishing a Call for Information and Nominations to obtain nominations from companies interested in commercial wind energy leases within the New York Bight. This region represents an area of shallow waters between Long Island (to the north and east) and the New Jersey coast (to the south and west).

In addition to nominations, BOEM seeks public input on the potential for wind energy development in the Call Area. This includes site conditions, resources, and multiple uses in close proximity to, or within, the Call Areas that would be relevant to BOEM’s review of any nominations submitted, as well as BOEM’s subsequent decision whether to offer all or part of the Call Areas for commercial wind leasing.

“This administration is committed to the economic prosperity and energy security of all Americans,” said Interior Counselor for Energy Policy, Vincent DeVito. “We must use all types of resources at our disposal to ensure an energy-secure future – one that promotes jobs and is affordable, competitive and safe. This includes offshore wind as part of a diversified energy portfolio.”

“We understand that development on the Outer Continental Shelf requires us to consider how these developments can affect people who make their living on the ocean.” said BOEM Acting Director Walter Cruickshank. “BOEM will continue to work closely with our stakeholders, including state government agencies and ocean users, to look at the potential impacts of offshore wind from a regional and cumulative perspective. For example, commercial and recreational fishing are important cultural and economic activities that must be considered. We encourage everyone to participate and provide feedback to help us identify future wind energy areas with the least impact to other ocean uses.”