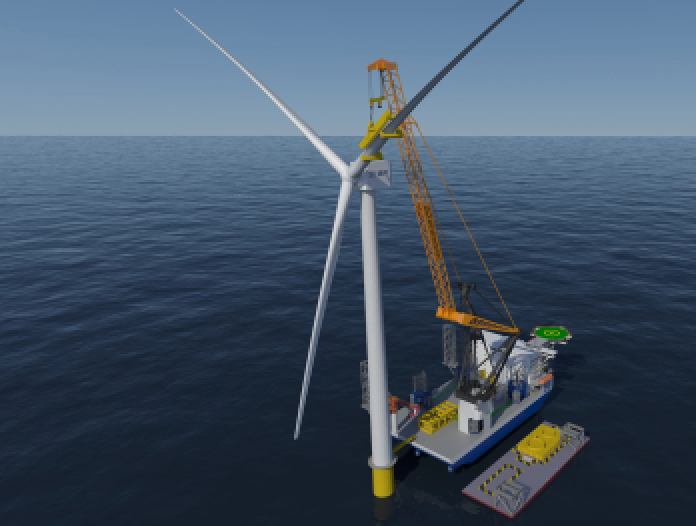 A solution proposed by Friede & Goldman and Tetrahedron would use a small jack-up with a big crane fed with components by standard Jones Act barges. (Credit: NewWindShape)

U.S. offshore wind development is picking up pace, with the Biden administration doing everything open to it to remove kinks from the regulatory pipeline. With multiple Atlantic Coast projects moving along, the White House last month made an announcement that could see the offshore California wind lease sale by mid-2022. As we’ll discuss later, that opens the way for the first floating wind farms off the U.S. coast.

Meantime, on the Atlantic Coast, it remains to be seen how the issue of wind farm installation within the constraints of the Jones Act resolve it. Two classic models have already been adopted. In Virginia, Dominion Energy has placed an order at the Keppel AmFELS shipyard for a Jones Act compliant Wind Turbine Installation Vessel (WTIV) designed by GustoMSC to handle turbine sizes of 12 megawatt (MW) or larger. Equipped with a 2,200-metric-ton lift capacity leg-encircling crane, it will also be capable of the installation of foundations for turbines and other heavy lifts.

The overall project cost, inclusive of construction and commissioning and excluding financing costs, is estimated to be around $500 million. Financing for the vessel has been arranged through a lease financing agreement with leading global banks.

For that money, Dominion is getting a vessel that can lay the foundations for a turbine, go back to a U.S. port, load up with turbine components and then go back on site and plant them.

Vineyard Wind, in contrast, has partnered with Belgium-based DEME, which will install the turbines at the Vineyard Wind 1 project off the coast of Martha’s Vineyard, Mass., using a large foreign-flag WTIV that will stay on site offshore with the turbine components being supplied to it by Foss Maritime Company using Jones Act-compliant feeder vessels operating from the port of New Bedford, Mass.

Though it’s widely supposed that Jones Act feedering of foreign flag WTIVs will be the most widely adopted method. The problem here is that turbines are getting bigger and offshore wind farms are being installed worldwide. That means that mega WTIVs will be in short supply.

One company seeing a need for more U.S.-built large WTIV is Emanuele Lauro’s Eneti Inc., the company that used to be called Scorpio Bulkers until it decided to sell off the bulkers and get into the WTIV market. It has just finalized a $330 million at Daewoo Shipbuilding and Engineering in Korea for a WTIV with a 2,600-ton leg-encircling crane and will be capable of installing up to 20 MW turbines at depths of up to 65 meters of water.

Announcing the DSME order, Lauro said that Eneti is in discussion with American shipbuilders for a WTIV that “would be constructed, financed, and operated by American citizens in compliance with the Jones Act, in order to address the heightened demand for transportation and installation capacity on the Continental Shelf of the United States.”

Yet another option has been put on the table by Houston-based Friede & Goldman, long a leader in jack-up technology, has partnered with Rotterdam-headquartered Tetrahedron B.V. to offer a feedering solution for the U.S. offshore wind market called NewWindShape.

Basically, instead of using a large WTIV, the turbines are installed using a relatively small F&G designed jack-up, which would not need to be a Jones Act vessel, fitted with a Tetrahedron leg-encircling crane.

Turbine components are brought to the jack-up using standard Jones Act ocean barges as feeder vessels. A key component of the system is the Tetrahedron model 65 crane. Able to achieve lifting heights of 200 meters above the still water level and with a 20 MW turbine installation capability, the crane has a tetrahedron shape. This shape allows the crane to take the increased side loads often seen with afloat load transfers.

Meantime, on the West Coast …

“Because the outer continental shelf falls away much more quickly into much deeper waters in the Pacific than it does in the Atlantic Ocean, new floating offshore wind technology will be deployed in offshore California waters,” says a White House fact sheet. “Notably, and as a further demonstration of the Biden administration’s whole-of-government approach to clean energy development, the Department of Energy, through its Office of Energy Efficiency and Renewable Energy and ARPA-E, has invested more than $100 million in researching, developing, and demonstrating floating offshore wind technology. These investments have helped position the United States as a leader in the emerging global floating offshore wind market.”

One of the floating wind technologies that has emerged from the Department of Energy R&D is SpiderFLOAT—named for its modular components that resemble spider legs— which is seen as having the potential to reduce costs by simplifying the construction and maintenance logistics for deep-water wind systems in challenging offshore marine environments.

The aim is to design and develop advanced controls to support a 12 MW floating offshore wind turbine. GE is partnering on the project with Seattle-headquartered naval architecture and marine engineering firm, Glosten, the developer of the PelaStar tension-leg platform floating wind turbine foundation.

Rogier Blom, a Senior Principal Engineer in GE’s Model-Based Controls and the project’s principal investigator, says the enormity of building a floating platform that can support a structure as massive as an 850-plus-foot offshore turbine cannot be understated.

By coupling a 12 MW GE turbine with Glosten’s tension leg platform technology, the team has taken on the challenge of designing a lightweight-floating turbine with up to 35% less mass in the tower and the floating platform. This is expected to result in a very significant reduction of the resulting Levelized Cost of Energy—LCOE—of the electricity generated with this turbine. The core principle that makes this possible is co-designing the controls system with the tower and floating platform.