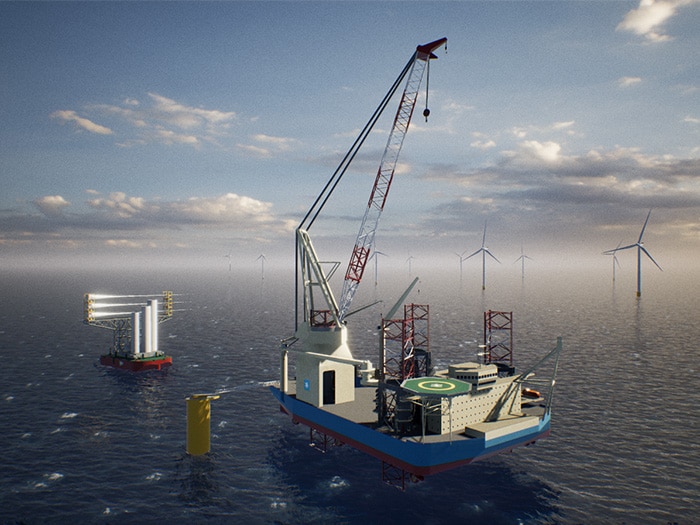 Supporting the newbuild investment, Maersk Supply has been awarded a firm contract with Empire Offshore Wind, a joint venture between Equinor and BP, for the installation of U.S. offshore wind farms Empire 1 and 2.

Maersk Supply has been developing an innovative concept for installing offshore wind turbines since 2019. It says that it is is 30% more efficient than using conventional jack-up WTIVs due to its use of feeder barges. For the Empire Wind contract, Maersk Supply has partnered with Kirby Offshore Wind, a subsidiary of Kirby Corporation, which will provide the feeder barge spread in compliance with the Jones Act.

The Maersk Supply installation vessel features a patented load transfer system that will enable safe transfer of cargo. The concept will utilize two newbuilt tugs and barges to transport wind turbine components out to the the installation site, while the WTIV stays on location to carry out successive installations.

TUGS AND BARGES BUILT IN U.S.

Kirby says its contract with Maersk represents a 20-year framework agreement with the Empire Wind projects being the first.

Kirby will be investing in two new ABS classed feeder barge and diesel-electric hybrid tugboat units, which will be constructed in U.S. shipyards for a total combined cost of between $80 million to $100 million. Each feeder barge will have the capacity to transport next-generation turbines of 15 megawatt and higher as turbine technology advances. The capital investment for the new vessels will be incurred through progress payments over the 2023 to 2025 time frame.

Kirby’s offshore marine facility in Staten Island, N.Y., as well as its marine headquarters in Houston, Texas, will be the base of operations for the company’s offshore wind activities.

The tugs and barges will be built and operated in the U.S. by Kirby Offshore Wind, in compliance with The Jones Act. The newbuilt tugs and barges will further create employment opportunities for U.S. citizens—both during the vessel construction phase and the subsequent operations for Equinor and BP.

As we reported last week the installation Vessel will be built in Singapore by Sembcorp Marine, with the steel-cutting ceremony set for Q4 2022. The jacking units, load transfer system and crane will be provided by NOV, and the design work has been supported by class society ABS. Delivery of the vessel into U.S. waters is expected in 2025.

“The new feeder solution equips Maersk Supply Service with a methodology that ensures a radically more efficient installation, which will in turn enable developers to release their supply chains more quickly and lead to faster revenue generation from their wind farms. All of this will contribute to bringing down the levelized costs of offshore wind. The solution is also less weather dependent, allowing installation all year round. The feeder methodology has been designed in-house and patented by Maersk Supply Service, and is a real credit to the innovation and hard work of the teams involved,” says Jonas Munch Agerskov, COO at Maersk Supply Service.

With A.P. Møller-Maersk’s leading position on green methanol, Maersk Supply Service and Kirby Offshore Wind are looking into making it possible for the WTIV, tugs and barges to operate on climate-neutral fuels.