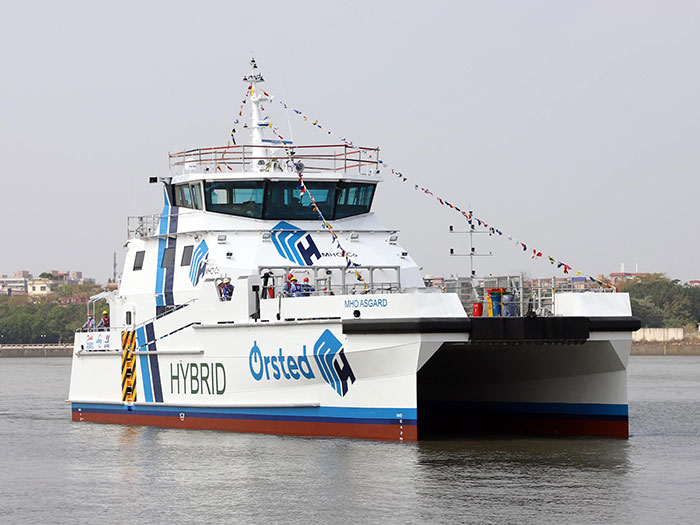 China’s AFAI Southern Shipyard has delivered two Incat Crowther designed hybrid crew transfer vessels to Esbjerg, Denmark, headquartered MHO-Co. Measuring 34.4 meters in length overall and with an 11 meter beam, the CTVs, the MHO Asgard and the MHO Apollo, are the third and fourth Incat Crowther-designed vessels for MHO-Co, following on from MHO Esbjerg and MHO Gurli, and will service the Hornsea Project 2 offshore wind farm in the North Sea for Ørsted.

As we reported earlier, MHO-Co is leading a consortium that aims to develop a propulsion system that will use fuel cells and a new type of liquid-cooled battery to eliminate CO2 emissions and the two new vessels will later be used to test bed that technology. Meantime, they are powered by a state-of-the-art propulsion system developed in collaboration with Danfoss and Volvo Penta. The system comprises a pair of diesel drivetrains and a pair of diesel-electric drivetrains, each driving Volvo Penta IPS drives.

The main diesel engines are Volvo Penta D13s, producing 515 kW each. The generators used for the diesel-electric propulsion train are Volvo Penta D8-MH units. A further three of these units are located in the hulls amidship, alongside a Volvo Penta D5 used as a harbor generator. Propulsion is via highly efficient Volvo IPS units. Additionally, a Corvus battery system provides stored power for zero-emission operation.

The system allows the vessels to operate in zero-emission electric mode for up to 8 hours or, in combination with diesel propulsion, to achieve a maximum speed of 25 knots. Incat Crowther notes that the use of multiple modular generators enhances flexibility, as power generation can be optimized for the operational profile.

Incat Crowther worked with MHO-Co to develop a design that improved on its predecessors, offering even more space and functionality. The design’s flexible layout features a vast 110 square meter foredeck with multiple tie-downs, deck crane, moon pool and the capability to take B2W, Bring-to-Work systems. The Z-Bridge BTW system has been trialled on MHO Esbjerg.

MHO Asgard and MHO Apollo accommodate 24 technicians in mid-deck cabins. A comfortable saloon for technicians is located on the main deck with 24 suspended seats, lockers, a pantry and a separate mess. Additional technician rest spaces are also located on this deck, as is a large wet room with lockers and showers.

“Designing and building hybrid CTVs is a huge step in the environmental direction, and I am proud that we at MHO-Co have found partners who share our vision for sustainable development in the offshore industry,” says MHO-Co CEO and founder, Mik Henriksen.