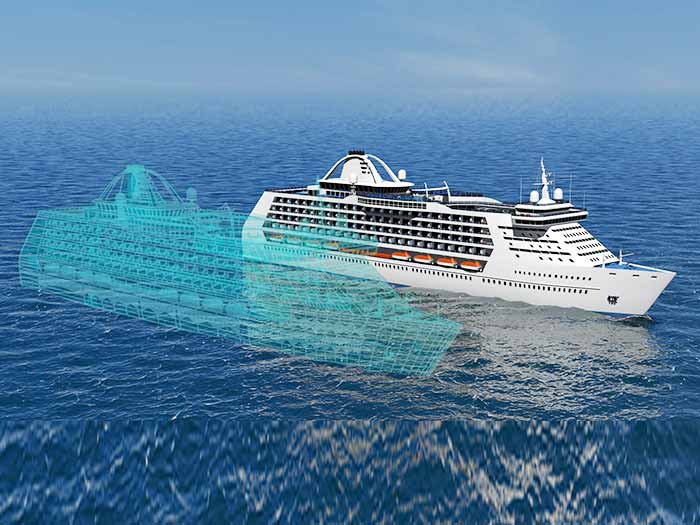 MARCH 23, 2018 — The concept of giving ships “digital twins” is getting increasing attention.

According to the Danish Maritime Authority, digital twin presents a ship digitally throughout its lifetime, making access to every bit of information on the ship – from engine performance to hull integrity – available at a glance.

A digital twin is a digital presentation of a vessel with associated processes and systems, based on continuous data collection. And these processes or systems are presented digitally. Rather than arranging for a physical test cycle, the processes can be followed easily and quickly.

“The potential of the digital twin is huge because it is possible to make a number of decisions on optimization digitally rather than by means of physical tests, and this potential will increase along with the development of digital tools,” says Mogens Schrøder Bech, Senior Consultant on R&D at the Danish Maritime Authority.

“This enables us, for example, to create visual models of the ship and its underlying systems, such as engine spaces and pumps, or to continuously record its fuel consumption, distributed on sources of energy, such as engines, boilers and batteries,” says Bech. “Other outcomes could be simulation and analytical models that are developed to acquire the optimum fuel consumption for a particular voyage with a specific cargo, by including external factors such as wind, current and weather conditions.

Another aspect of the “twin” is digital cooperation across the sector. Many players are engaged in the ship’s lifecycle, such as shipbuilders, shipowners, marine equipment suppliers, public authorities, classification societies, universities, maritime university colleges and ship consultants. These players can benefit much from a systemic approach, including the availability and exchange of data.

The Danish Maritime Authority has published a new report “Digital Twins for Blue Denmark,” prepared by DNV-GL, that considers the ship from the design phase to its scrapping, while involving the relevant players.

Meantime, new partners have joined the Open Simulation Platform (OSP) initiative, which aims to create an open source digital platform that will allow the creation of digital twins in the design of ships. The initiative was launched this week at the Norwegian Maritime Competence Center in Ålesund.

In July last year Rolls-Royce Marine, the Norwegian University of Technology Science (NTNU), research organisation SINTEF Ocean and classification society DNV GL signed a memorandum of understanding (MoU) with the aim of creating an open source digital platform for use in the development of new ships. They have now been joined as Joint Industry partners in the OSP by Hyundai Heavy Industries, Kongsberg Digital, Vard and Offshore Simulator Center.

Jon Rysst, SVP and Regional Manager at DNV GL Maritime North Europe said: “OSP is a joint industry project where the goal is to establish a maritime industry standard for models and system simulation, a standard that will allow companies to reuse simulation models and construct digital twins of existing and future vessels in a safe and more cost-efficient way.”

The project partners will create a collaboration platform that is open for use by other parties, with core aspects built on an open source framework.