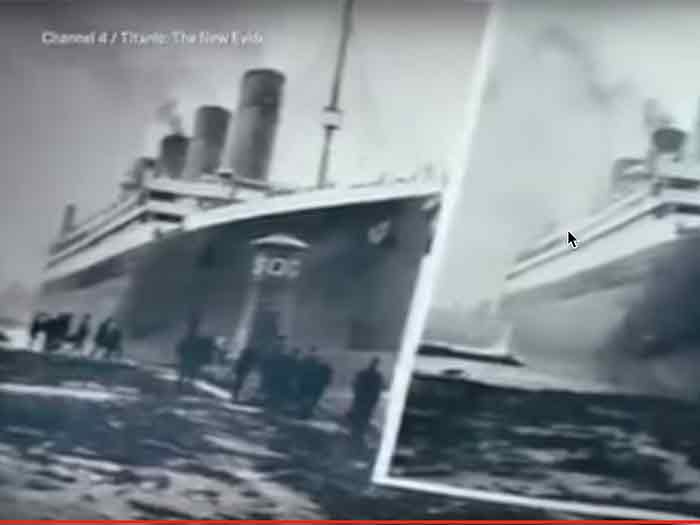 JANUARY 2, 2017 — Irish Times journalist Senan Malony has a new theory on the April 15, 1912 sinking of the RMS Titanic after colliding with an iceberg.

In a documentary first broadcast January 1 on the U.K.’s Channel 4, Mr. Malony, who has spent more than 30 years researching the disaster, presents fresh evidence that the Titanic’s hull may have been crippled by a bunker fire that had been burning unchecked for almost three weeks immediately behind the area where the ship’s hull was penetrated.

Mr. Malony used little known photographs taken by the Titanic’s chief electrical engineer before it left Belfast shipyard to identify a 30ft-long black marks along the front right-hand side of the hull.

Experts subsequently confirmed these were likely to have been caused by fire damage, as a result of hundred of tonnes of coal catching fire due to “self-heating” in the bunker behind boiler room six.

“We are looking at the exact area where the iceberg stuck, and we appear to have a weakness or damage to the hull in that specific place, before she even left Belfast,” Mr. Maloney says. “Nobody has investigated these marks before. It totally changes the narrative. We have metallurgy experts telling us that when you get that level of temperature against steel it makes it brittle, and reduces its strength by up to 75 percent.”

Incidentally, it is not news that a bunker fire was raging aboard Titanic. There have been extensive published references to it. Indeed, one source says the fire “was serious enough that it was planned to have the New York City Fire Department extinguish it once the ship arrived in New York Harbor.