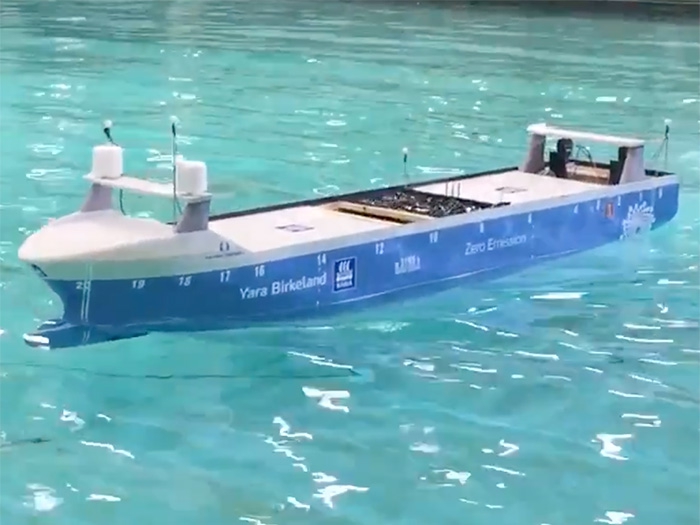 Model is being tested at SINTEF

The full scale Yara Birkeland will be an autonomous 120 TEU open top containership that will be fully battery powered. The shipyard that will build the vessel has yet to be selected, but the targeted launch date is first quarter of 2019.

As we reported in May, Kongsberg is responsible for development and delivery of all key enabling technologies on the vessel, including the sensors and integration required for remote and autonomous operations, in addition to the electric drive, battery and propulsion control systems. The zero-emission ship will initially operate as a manned vessel, moving to remote operation in 2019 and to fully autonomous operations from 2020. The new zero-emission vessel is seen as a game-changer for global maritime transportation contributing to meeting UN sustainability goals.

The model was launched in SINTEF Ocean’s 80 m long sea laboratory in Trondheim, Norway this week and its design, developed by Marin Teknikk, has now been revealed.

The cutting edge, six meter long and 2.4 tonnes heavy model with technology destined for the real ship, including a fully working thruster system designed by Kongsberg, will now undergo comprehensive testing at SINTEF’s test tanks before construction of the full-scale vessel starts. The shipyard will be selected by the end of 2017.

“Initial tests of the model were successful, proving both concept and the technology,” says Geir Håøy, President and CEO of Kongsberg. “The testing at SINTEF Ocean marks an important milestone in the development. This vessel is important for the entire maritime industry, and Yara deserves praise for their initiative and commitment. Yara Birkeland is the start of a major contribution to fulfilling national and international environmental impact goals, and will be a global milestone for seaborne transportation.”

The Norwegian government enterprise ENOVA has granted NOK 133.6 million (about $17 million) towards the construction of the ship. This will cover about one third of the estimated cost.

“For the private sector, it is essential to have the government’s support when we develop new technology and deliver bold innovations. It allows us to be daring,” says President and CEO of Yara, Svein Tore Holsether.

“The interest in autonomous transport is great, but at the same time, many are skeptical and question the safety. The key contribution from this project is to demonstrate that autonomous and electric sea transport is feasible, and will deliver the results we want,” says Nils Kristian Nakstad, CEO of ENOVA, which is responsible for promoting and supporting environmentally friendly production and energy consumption.

Yara Birkeland will be named after Yaras’s founder, Kristian Birkeland, and will transport fertilizer from Yara’s production plant in Porsgrunn to the container ports in Brevik and Larvik. By moving this transport from road to sea, Yara will remove 40,000 journeys with diesel-powered truck transport every year.

“With this new autonomous battery-driven container vessel we move transport from road to sea and thereby reduce noise and dust emissions, improve the safety of local roads, and reduce emissions,” says President and CEO of Yara, Svein Tore Holsether. “It was a special moment in Trondheim when, together with our partners — Kongsberg, Marin Teknikk , SINTEF and ENOVA — we witnessed the design and demonstration of a miniature Yara Birkeland for the first time.”