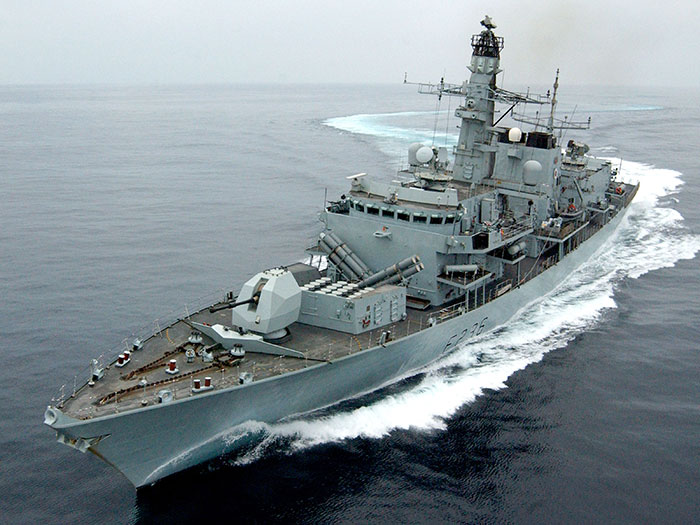 A U.K. Royal Navy frigate has blocked an attempt by Iran’s Islamic Revolutionary Guard Corps to interfere with the passage of a BP Shipping tanker through the Strait of Hormuz.

According to multiple media reports, the 158,277 dwt British Heritage was approached by three Iranian Islamic Revolutionary Guard Corps boats that ordered the vessel to stop in nearby Iranian waters. The Type 23 frigate HMS Montrose, which had been escorting ithe tanker, trained its guns on the Iranians and told them to move away.

The Daily Telegraph reports that a U.S. aircraft flying overhead filmed the incident, but the footage has not yet been released.

The Telegraph quotes a U.K. Ministry of Defence spokesman as saying:

“Contrary to international law, three Iranian vessels attempted to impede the passage of a commercial vessel, British Heritage, through the Strait of Hormuz.

“We are concerned by this action and continue to urge the Iranian authorities to de-escalate the situation in the region.”

Iran’s Fars News Agency quoted a statement from the IRGC as saying “Naval patrols of the Guards Corps in the Persian Gulf continue vigilantly, precisely and strongly based on regular procedures and missions, and during the last 24 hours, there have been no encounters with foreign vessels, including the British ones,” a statement by the IRGC Fifth Zone said on Thursday.

Iranian authorities are still outraged by the seizure of an Iranian tanker off Gibraltar by U.K. Royal Marines. That vessel is suspected of breaking EU sanctions and remains under detention.

An approach of this manner fits the profile of previous Iranian efforts to harass vessels in the Strait of Hormuz. This activity is not unusual and has been a hallmark of IRGC(N) activity within the region at times of geopolitical tension. It remains Dryad’s assessment that this latest attempt represents a credible “show of force” by the Iranian regime and IRGC(N), which is designed to act as a tangible follow up to British involvement in the detention of the Grace I. It would be highly unlikely for Iran to persist in any attempt to detain a vessel in international waters or to engage a vessel with weapons. Any action of this nature would significantly compromise ongoing Iranian diplomatic efforts as well as significantly increase the likelihood of direct military action against Iran. Furthermore, it remains in line with pre-existing assessments that IRGC(N) units would attempt to continue to conduct harassing activities towards commercial vessels in the Strait of Hormuz in light of increased regional tensions. These activities are likely perceived by Tehran as being consistent with how it perceives it should respond to what it sees as its ‘unfair’ treatment by the wider international community.

The broader geopolitical situation is also to be considered. Iran continues to be engaged with wider diplomatic efforts with the EU in attempts to maintain an avenue of trade in that area and subsequent, albeit partial, sanctions relief. In addition Iran may be attempting to exploit ongoing diplomatic tensions between the U.K. and the U.S., particularly at a time when the U.S. has been hesitant to commit additional material resources to its naval convoy proposal. Iran is acutely aware of its fragile position, both in terms of its ongoing efforts to control and mitigate the damage of sanctions and in terms of its avoidance of direct military conflict with the U.S. and as such these twin narratives present the most logical lens through which to understand Iranian activity.

It remains the case that U.K. flagged vessels, as well as broader FoC and UK interests, continue to exist in a status of heightened but manageable risk. It is highly likely that this latest incident will provide further impetus for a coordinated international response to provide naval escorts to vessels within the region.