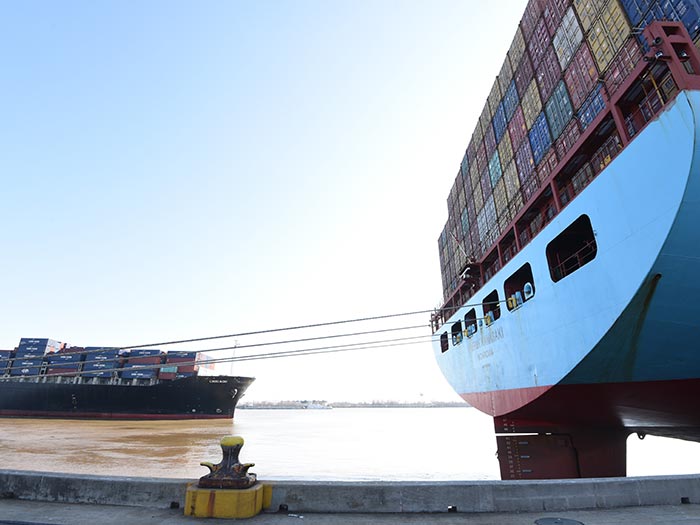 The Port of New Orleans (Port NOLA) moved more containers in 2019 than at any time in its history, totaling 648,538 twenty-foot equivalent units (TEUs), up 10% compared to one year ago. This is the sixth consecutive year the port surpassed the half million TEU-mark at its Napoleon Avenue Container Terminal, which is operated by New Orleans Terminal and Ports America.

The port gained a new direct service to Asia when it welcomed MSC’s Lone Star Express weekly service in 2019. Maersk and ZIM partner on the new service which fortifies the Port’s direct connectivity with Far East markets and offers more shipping options for customers. This is the second direct-Asia service to New Orleans in addition to CMA CGM’s PEX 3 service with COSCO, Evergreen and OOCL as partners.

Port NOLA now offers 12 weekly container services from three major global alliances as well as independent carriers, with direct connections to 60 global ports and more than 450 others through connecting services.

Port NOLA says that the container on barge service between Baton Rouge, New Orleans and Memphis continues to thrive and offers shippers an efficient and environmentally friendly option for moving their cargo.

The service repositions containers from Memphis to Baton Rouge, where they are loaded with plastic resins and shipped by barge to Port NOLA to be loaded onto container ships for export to global markets.

Port NOLA continued to see visible results of alignment with the New Orleans Public Belt Railroad in 2019, a year after the Port’s acquisition of the short line railroad in 2018.

Intermodal growth was up 20% in 2019, fueled by the Kansas City Southern (KCS) direct service between New Orleans and Dallas. Intermodal services by CN Railroad into Memphis, Chicago, Detroit and Toronto and KCS’ weekly service into the Dallas-Fort Worth market are critical inland markets that continue to further grow volumes in New Orleans.

Port NOLA says its container volume growth warrants new infrastructure investments both in the near term and for the next generation. Port NOLA has embarked on a $100 million expansion plan that includes the procurement of four new 100-foot-gauge container gantry cranes and other enhancements to the container terminal. This investment will add significant capacity to the Napoleon Avenue Container Terminal and allows the port to work larger ships more efficiently.

“These cranes will be Louisiana state assets that produce jobs, provide economic output and keep Port NOLA among the most competitive seaports in the Gulf,” said Christian. “An economic impact study found that just two additional cranes would create 1,147 jobs and $3.6 million in tax revenues for Louisiana.”

The new cranes are expected to be operational in mid-2021.