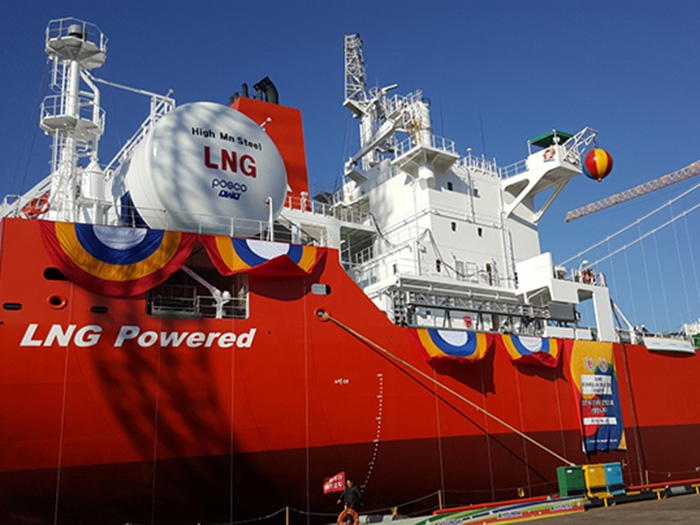 Built to dual Lloyd’s Register and Korean Register class, the 50,000 dwt vessel has also been verified to be in compliance with the International Gas Fuel (IGF) Code.

As we reported earlier (see story) the vessel is powered by an MAN B&W 6G50ME-C9.5-GI engine

The vessel is the result of a collaboration project, announced in July 2016, to develop the first in a new generation of environmentally-friendly LNG-fueled bulk carriers.

The ship has a Type “C” LNG fuel tank with a capacity of 500 cu.m, made of austenitic high manganese steel and located on the aft mooring deck. The material, newly developed by steelmaker POSCO, has a high manganese content (approximately 26%) and is specially designed for cryogenic LNG and liquefied gas storage applications. The properties and characteristics of the high-manganese steel, as well as the required welding technology and fuel tank design, have been proven suitable for cryogenics with the support, certification and approval of LR.

POSCO is chartering the vessel to transport limestone for its operations.

J.T. Lee, LR’s Chief Representative & Marine Manager for Korea, commented: “I am very excited and proud to see the successful delivery of the world’s first 50,000 dwt LNG-fueled bulk carrier with contribution from LR for the certification and approval. This outstanding achievement is also attributed to a concerted effort between industry partners, with their pioneering spirit and tenacity. The successful delivery of the vessel should be a significant indication to the market of a reasonable and solid solution to the preparation for emission compliant eco-friendly designs.”

Though the vessel is the largest LNG fueled bulker built thus far, it is not the first. That title is held by the 5,875 dwt cement carrier M/V Greenland, delivered by Netherlands-based shipbuilding company Ferus Smit on December 23, 2015