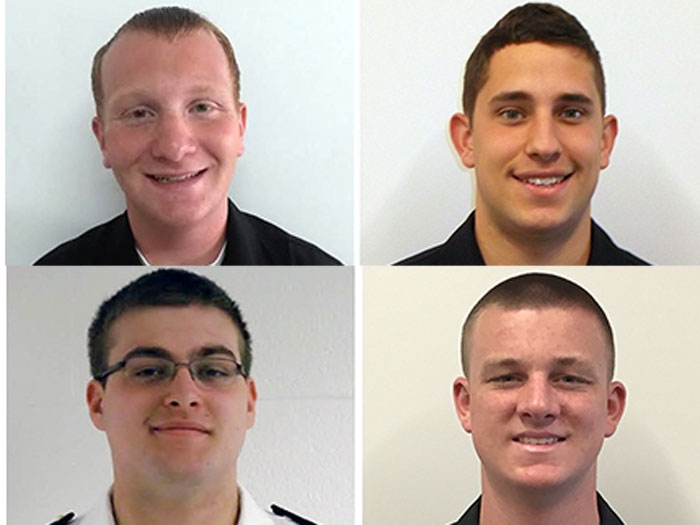 Wall is a freshman from Manasquan, NJ, majoring in marine transportation. He is a Midshipman in the Navy Strategic Sea-lift Officer Program, is a member of the Honor Guard, an Eagle Scout and certified diver. His completion of a Sea Term aboard the T/S Kennedy with the Academy solidified his desire to have a career in the maritime industry. He expects to graduate in 2018 and looks forward to the possibility of working in commercial shipping aboard a Crowley vessel.

Neal is a junior from North Billerica, Mass., majoring in marine engineering. He worked for the MMA Power Plant as part of the work study program this past year and has completed two cadet commercial cruises through Military Sealift Command and Crowley. Neal expects to graduate in 2016 and feels he would not be able to complete his education without this support.

Persechino is a sophomore from Barkhamsted, Conn., majoring in marine transportation. Persechino has held a work-study position for the marine department on campus, completed two MMA sea terms on the T.S. Kennedy and looks forward to a commercial shipping opportunity. Persechino appreciates the financial support’s role in enabling him to pursue his dream of a career in the shipping business. He expects to graduate in 2017 and has expressed particular interest in working for Crowley during the upcoming winter term.

Szloch is a junior from Melrose, Mass., and a marine transportation major. He was an orientation assistant disciplinary officer squad leader for Third Company and is now Cadet Chief Mate for the upcoming academic year of 2015-2016. Szloch completed two sea terms with the TS Kennedy and one commercial ship with Crowley’s Golden State. He expects to graduate in 2016 and would like to thank Crowley for inspiring him to help reach his goal of becoming a maritime officer.

Since 1984, Crowley has provided more than $3 million dollars in scholarship funding for more than 1,000 students studying at maritime academies and other select institutions in the U.S., Puerto Rico and Central America. In 1994, Crowley Chairman and CEO, Tom Crowley Jr., established the Thomas B. Crowley Sr. Memorial Scholarship Program, in honor of his father, and has also donated more than $2 million to support other educational programs.
L to R (Top) Adam Szloch, Peter Persechino, (Bottom) Robert M. Neal, and Bryan P. Wall