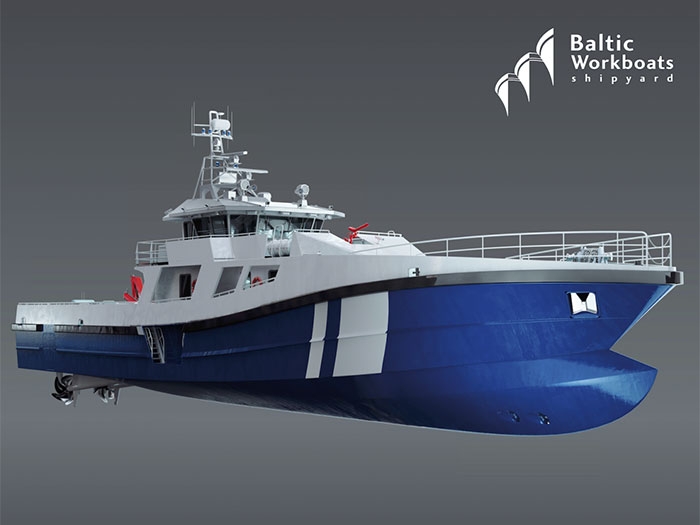 JUNE 6, 2016 —Estonia’s Baltic Workboats AS has won an EUR 16 million contract to design and build an advanced new multifunction patrol vessel for Estonia’s Police and Border Guard Board.

It will be between 42 m and 45 m long and will be designed primarily to combat pollution, as well as to perform offshore patrol, search and rescue, fire fighting and hydrographic tasks, including the capability to lift, transport and launch buoys.

Margus Vanaselja, CEO of Baltic Workboats, said that the new vessel “will not only perform a vital role for Estonia, but also enable Baltic Workboats to expand its export potential and reach new customers around the world.”

The vessel will top the Baltic Workboats range of high-speed wave-piercing all-weather vessels.It will be equipped with cutting edge new technology, such as a 9.2 GHz radar that can detect marine pollution, even from a distance in rough seas, and locate a person floating on the surface of the water from five nautical miles away.The vessel will also have side-scan sonar to monitor water quality below the surface and scan the seabed, enabling it to observe pipelines and detect pollution from shipwrecks.Twin MTU 16V4000 marine engines, will give the vessel a maximum speed of 25 knots, while economic cruising speed is designed to be between 10 and 16 knots with a minimum range of 2,500 nautical miles.On arrival at the scene of an oil spill, the vessel will deploy advanced oil spill response equipment, including skimmers and booms to contain and clear up the pollution. In the event of a rescue or special operation,it can also deploy its 7 m workboat and RescueRunner boat.
In regularly operation, it will have a crew of 10 people, although 18 can be accommodated onboard when a larger crew is required for week-long missions.
Baltic Workboats will now work closely with the Estonian Police and Border Guard Board to complete the final design stage for the vessel, which will include model testing and the agreement of final specifications.
The shipyard designs, builds and delivers a wide variety of aluminum and steel vessels from pilot and patrol boats to ferries and research ships. Its turnover in 2015 was EUR 23 million and it currently has vessels under construction for customers in Estonia, Sweden, Denmark and Belgium.
The yard’s 5,500 sq.m covered facilities are located in the Baltic Sea on the island of Saaremaa,